Peshawarties demand the removal of encroachments from the ancient city 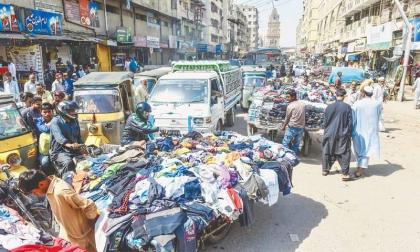 PESHAWAR, Oct 30 (APP): The residents of the walled city here Sunday demanded the district administration to take legal actions against those erecting illegal encroachments in the streets-cum-bazaars causing massive obstacles for women pedestrians.

The areas inside the city from Hashtnagri to Ramdas intersecting Qissa Khwani were occupied by people doing their businesses through handcarts and patrolling across the bazaars. On the other hand, most of the traders had rented their shops’ fronts to vendors who arranged their stalls causing blockage of roads.

The situation was also out of control by the deputed traffic employees while a few days back the staff of town administration was badly beaten by the traders’ community, which FIR has been registered in the relevant police station.

The roads and streets have been narrowed up to 5 to 6 feet due to illegal occupation by the handcart mafia.

The employees of district administration were also handcuffed over the situation despite conducting several operations on anti-encroachment across the walled city. The business community who were involved in malpractices again erected encroachments after the operation.

The residents of different areas including Kareempura, Ghantaghar, Shaheen Bazar, Chowk Yaadgaar, Mochi Lara, Qissa Khwani, Mohallah Khudada, Kohati, Dabgari, Ramdas, Namak Mandi, and others strongly demanded the authority concerned to solve the issue on priority basis, so as they could live freely.