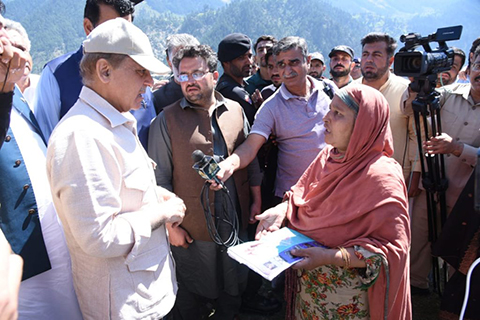 Addressing a gathering of flood-affected people here, the prime minister said that the amount would be spent for the relief and rehabilitation of the flood-hit people of the province. The federal government, National Disaster Management Authority and the provincial government, through close coordination, would ensure transparency and immediate disbursement in the affected areas.
The prime minister said earlier, the federal government had already announced Rs15 billion for Sindh province and Rs10 billion for Balochistan province respectively.
The prime minister opined that it was a collective responsibility of all the governments to work for the provision of relief to the flood-hit public and ensure that the allocated grants should be spent in a transparent manner and upon the deserving people.

“I will continue visiting the affected areas till the last affected person is rehabilitated,” he added.

He said that the federal government had allocated an amount of Rs 28 billion which was being disbursed among the affectees through NDMA and Benazir Income Support Programme.

He said every affected family was given a cash amount of Rs 25,000 whereas per family was entitled to Rs1 million that had lost its near or dear one.

The prime minister while expressing his grief and pain over the large-scale tragedy said that more than1,000 lives had been lost including 300 children.

He said the cash support extended by the federal government was no substitute for the loss of lives as the bereaved families would continue to mourn the death of their relatives for long, but it was the responsibility of the government to provide maximum comfort in this hour of grief.

The prime minister said that the latest reports were showing further damages caused by widespread flash floods across the country, adding about 5000 kms roads were damaged.

He also appreciated the relevant authorities, provincial governments, NDMA, PDMA and armed forces for their rescue and relief activities.

All authorities concerned had been doing whatever was possible, in a coordinated manner, to alleviate the sufferings of the flood-affected people, he added.

The prime minister thanked the Army Chief and the Air Chief for the provision of air helicopters and assistance in the ongoing operations.

He assured that by tomorrow, all the trapped tourists would be evacuated from these areas.

In Sindh, KPK, Balochistan and Punjab provinces, colossal damages were reported, he said, adding, over a thousand lives were lost, and standing crops were completely destroyed. About 700,000 animals were swept away while millions had been living under the open skies. Large-scale damage was caused to the houses and other connectivity infrastructure.

The prime minister also expressed his gratitude to friendly countries like Turkiye, UAE, and others for providing relief goods. The UAE was continuously sending relief goods worth $50 million through different flight operations.

A train had left from Istanbul whereas the United States had pledged humanitarian assistance for the flood affectees. The UN had issued US$160million flash appeal, he added.

The prime minister referring to the International Monetary Fund load facility said that it ensured that Pakistan was out of the woods, and expressed optimism that it should be the last IMF programme.

He stressed that they would have to work hard and tap the natural resources and the immense talent possessed by the people, besides boosting the industrial and agriculture sectors.

“With collective efforts, we will stand on our feet and realize the vision of Quaid-e-Azam Muhammad Ali Jinnah. Together, we will have to face all the challenges with full preparedness and restore the bygone glory of Pakistan among the comity of nations,” he said, adding the people tasked with serving of masses should strive to discharge their responsibilities with devotion and sincerity.

About his visit to the areas, the prime minister said that today, he met with different people and tourists and witnessed the damages caused to hotels and other infrastructure.

Different hotels and buildings were constructed along the river course which caused the disaster, he said, adding that he would also undertake visits to other flood-affected areas of KPK.

Earlier, the relevant authorities, apprised the prime minister of the losses and rescue, relief and rehabilitation operations.