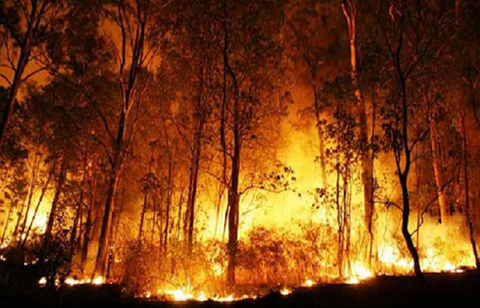 PESHAWAR, Jun 10 (APP): The Forestry, Environment, and Wildlife Department has declared `Climate Change’ as the major contributor behind the unprecedented fire in different forests of the province.

In a detail report prepared by the department on forest fire incidents occurring during the period from May 23, to June 9, it was observed that rising temperature, a key indicator of climate change, caused more evaporation of moisture from ground, drying out the soil and making vegetation more flammable.

At the same, winter snow packs had been melting down for about a month, which indicated that forests were drier for longer periods of time.

“Natural causes include climate change, lightening, temperature transmission through rocks drought and heat continue with rising greenhouse gas emissions, we expect more wildfires in years ahead, especially with the fire seasons getting longer,” warns the report.

Therefore, the decrease in rainfall and increase in temperature inordinately is a trigger for fires, the report explains.

Regarding anthropogenic activities, it says human action includes advertent or inadvertent actions. The tourist visiting forests for recreation purpose incidentally cause the forest fire and this year the biggest awareness drive was carried out by KP Forest Department during March and April, educating the tourist through social media, banners, pamphlets and brochures distribution.

The reports noted that the forest dependent communities traditionally burn dry grasses to get tender grass for livestock which sometimes resulted in forest fires due to winds and casual attitude of communities.

The report also mentioned rumours circulating in the areas that government was providing compensation or was to provide compensation for damages in forests and this might also have contributed to some of the fires.

About preventive measures, the report says while climate change requires another level of multi-sectoral action, KP’s Action Plan 2017 has been updated as 2022 and an exercise for preparation of dealing with more and more fires has already been submitted.

KP Forest Department and Wildlife Department are designed to protect designated areas – therefore a joint action plan (with cost sharing) needs to be framed with private and communal owners before the onset of next Fire Season with determined roles and responsibilities of both in advance to counter fire in private areas effective and timely, the report suggests.

The report further said that from now onwards, all the plantations and other such activities like sowing or Assisted Natural Regeneration will be planned for only designated forests to avoid any further clash with locals on converting their grazing lands into forests.