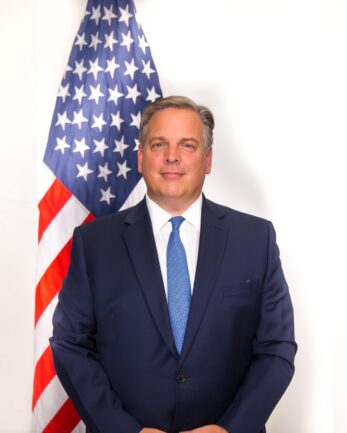 LAHORE, Sep 28 (APP): United States Ambassador to Pakistan Donald Blome on Wednesday said the US supported women’s participation in the economic sector through exchange programmes and entrepreneurship initiatives.
He expressed these views while visiting the Punjab Women Chamber of Commerce (PWCC) to meet
with current and former presidents.
US Consul General in Lahore William K Makaneole, WCC President Sam Ali Dada, Founder President
of WCC Dr Shehla Javed Akram and others were also present.
During his visit, the ambassador appreciated the efforts of women entrepreneurs and farmers,
and livestock extension workers in South Punjab and Sialkot.
He said: “We have imparted skills training and career counseling to more than 10,000 youth, of which 45 percent were females in South Punjab besides creating entrepreneurship opportunities for 9,000 youth.
He said that recently, USAID supported about 240,000 women in 18 districts of Punjab to register for their computerized national identity cards, which would allow them to vote and benefit from various government support programmes.
The ambassador emphasized that creating economic opportunities for Pakistanis, including women,
was the US mission priorities. “When women are economically empowered, they reinvest in their families
and communities besides strengthening social fabric and improving education and skill levels of the workforce”, he added.