World Day against Trafficking in Persons to be marked tomorrow 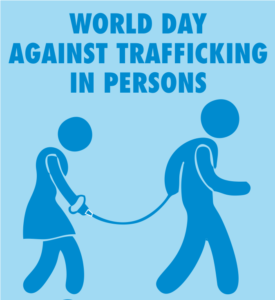 ISLAMABAD, Jul 29 (APP): World Day against Trafficking in Persons will be marked on July 30 (Saturday) across the globe including Pakistan to create awareness about human trafficking and worldwide efforts to defeat this scourge.

Millions of people are victims of human trafficking and almost a third are children.

In 2013, the UN member states adopted a resolution that designated July 30 as the World Day against Trafficking in Persons. They declared that such a day was necessary to “raise awareness of the situation of victims of human trafficking and for the promotion and protection of their rights.”

The Global Plan of Action to Combat Trafficking in Persons was adopted in 2010 and urges governments worldwide to take coordinated and consistent measures to defeat human trafficking in all its forms. The UN plan calls for integrating the fight against human trafficking into the UN’s broader programmes to boost development and strengthen security worldwide.

According to the International Labour Organization (ILO), around 21 million people are victims of forced labor globally, and of these, a significant number are also trafficking victims.

The UN resolution also states that trafficking in persons, especially women and children, constitutes an offense and a serious threat to human dignity and physical integrity, human rights, and development. Despite sustained measures taken at the international, regional, and national levels, trafficking in persons remains one of the grave challenges facing the international community, which also impairs the enjoyment of human rights and needs a more concerted international response.

According to the 2016 UN report, women and girls tend to be trafficked for marriages and sexual slavery, while men and boys are typically exploited for forced labor in the mining sector, as porters, and as soldiers. It also states that refugees from war and persecution are particularly vulnerable to becoming victims of human trafficking.