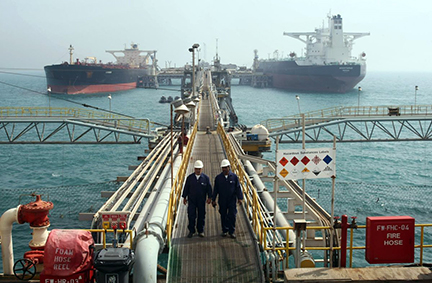 BASRA: An oil spill has forced a shutdown of all crude oil exports from Iraq’s Basra Port, oil sector sources said on Friday, cited by Reuters.

With four tanker berths, the Basra oil terminal can process 3.3 million barrels of crude oil per day, although the country had plans to raise this capacity to 3.45 million barrels per day in Q2 2022. However, the expansion has not been completed on time due to delays in pumping station upgrades.

In mid-July, Iraq’s Basra Oil Company (BOC) said it was pushing back its estimated completion date for the expansion, with hopes to reach 3.35 million bpd in August and 3.45 million bpd by September.

The oil sector sources said that exports from Basra would remain shut in until repair work can be completed. It is unclear whether the oil spill or the repair work needed is related to the expansion project.

Other sources classified the oil spill as “huge”, and could take more than a week to contain. Still, other reports said it would be shut for just a few hours.

The port shutdown comes at an inopportune time for the oil markets, which remain tight. The largest purchasers of Iraq’s crude oil are China, India, South Korea, the United States, and Italy.

Iraq’s oil industry has not only been hampered by multiple delays in expanding its crude oil export capabilities. In late August, at least 30 people died and 300 were wounded in Baghdad after supporters of Iraqi Shiite cleric Moqtada al-Sadr charged the Republic Palace after the cleric announced he was leaving politics. While the chaos did not disrupt oil production or loadings, the events gave rise to fear that Iraq—OPEC’s second-largest oil producer—could see its crude exports decline as a result.