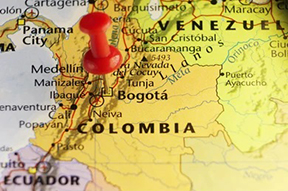 Bogota, Sept 17 (AFP/APP): For several months, bodies wrapped in plastic, some dismembered, have appeared on the streets of Colombia’s capital Bogota — grim proof of an escalating vendetta between rival Venezuelan gangs.
Not even the bombings by late drug kingpin Pablo Escobar, or the murderous activities of leftist guerrillas and right-wing paramilitaries have generated as much terror as the “packaged” corpses.
Since January, 23 bodies wrapped in plastic have been found abandoned in the city.
These are “violent murders by strangulation, firearms or also with knives and a lot of cruelty,” security minister Anibal Fernandez de Soto told AFP.
The bloody trail has led to eight of the 19 districts in a city that, while beset with organized crime, has been spared the worst of Colombia’s decades of violent conflict.
It is the dismembering that has most shocked residents.
The Tren de Aragua and Los Maracuchos gangs that were formed in Venezuela, and a third as yet unconfirmed group, are responsible.
“Those 23 terrible cases that we have seen, of murders where the bodies were found in bags, are related to a dispute between criminal groups that are fighting for control of illicit revenues,” said Fernandez de Soto.
And the turf war is “escalating”, according to the man responsible for a special force of 1,300 police and intelligence agents.