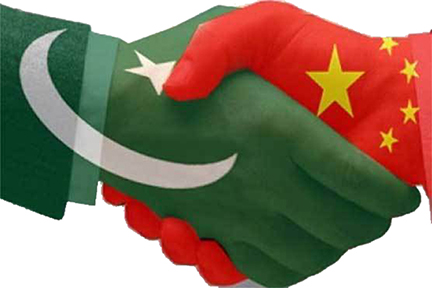 On the same day that Chinese Premier Li Keqiang emphasized their cooperation against terrorism in a phone call with Pakistani Prime Minister Shahbaz Sharif, Pakistan’s counterterrorism authorities arrested a woman who tried to launch a suicide attack against a Chinese convoy. The woman is a member of the group that carried out the terrorist attack that killed three Chinese teachers outside the University of Karachi in April.
The prevention of yet another terrorist attack against China-Pakistan cooperation in less than a month is significant, experts say, which demonstrates the Pakistani government’s commitment to stopping terrorism and preserving cooperation between the two countries. Long-term cooperation between China and Pakistan is not affected by extreme terrorist activity, they said.
Pakistani counterterrorism authorities raided the town of Hoshab in Balochistan on Monday, arresting a woman who tried to carry out a suicide bombing attack against a Chinese convoy along the China-Pakistan Economic Corridor, and recovering the explosive device, according to Pakistani media reports.
Pakistani counter-terrorism authorities said the woman was a member of the Balochistan Liberation Army (BLA), the same group that carried out the terrorist attack on the Confucius Institute at the University of Karachi on April 26 which killed three Chinese nationals.
The Pakistani counter-terrorism manhunt is underway to arrest other members of the group involved in the terrorist attack.
The blocking of the attack came hours after the phone call between Chinese Premier Li Keqiang and Pakistani Prime Minister Shahbaz Sharif on Monday.
Li expressed China’s appreciation for Pakistan’s active investigation into the terrorist attack and conveyed the cherishing of China-Pakistan friendship and the willingness to further strengthen bilateral cooperation.
Li pointed out that China is shocked and outraged by the recent attack on Chinese nationals in Karachi, and strongly condemns this terrorist attack.
The Chinese premier hopes that Pakistan will bring the perpetrators to justice as soon as possible, make every effort to handle follow-up matters, comfort the bereaved families and the injured, and comprehensively strengthen security measures for Chinese institutions and citizens in Pakistan to ensure that similar tragedies will not happen again.
Sharif once again expressed deep condolences over the death of Chinese nationals in the attack and sincere sympathy to the injured.
Pakistan will strengthen security measures for all Chinese institutions and nationals in Pakistan to prevent similar incidents from happening again, he said.
As the security situation in Pakistan is complicated and volatile at the moment, China and Pakistan will continue to carry out cooperation in combating terrorism and further strengthen the protection of Chinese projects and personnel, and the sharing of resources and intelligence, Qian Feng, director of the research department at the National Strategy Institute at Tsinghua University, told the Global Times on Monday.
“The terrorist organizations represented by the BLA chose to attack Chinese targets as they believed that China-Pakistan relations were the ‘soft underbelly’ of the Pakistani government, thus trying to force the Pakistani government to make concessions and compromises on political issues,” Qian said.
In the wake of April’s terrorist attack, Pakistan’s counterterrorism department’s timely prevention of another terrorist attack against Chinese-led projects on Monday demonstrates that Pakistan has further intensified its fight against terrorism, Zhu Yongbiao, director of the Center for Afghanistan Studies in Lanzhou University, told the Global Times.
The government has been more aggressive in preventing such attacks, especially in terrorist attacks against Chinese projects, he said.
Earlier, two suspects related to attack in the University of Karachi were arrested. On Sunday, the police developed sketches of another women suspected of facilitating the suicide bomber, local media reported.
Zhu also noted that the re-emergence of terrorist attacks against Chinese projects in a short period of time also suggests related risks. “It proves that plans to launch terrorist attacks against China still exist and that these organizations have the capacity to carry them out.”
While it remains difficult to see a significant improvement in Pakistan’s domestic security environment in a short period of time, experts do not regard that it will bring a fundamental blow to Chinese and Pakistani cooperation.
“The security environment in Pakistan has always been tough, and there has not been a sharp rise in terrorist attacks against China,” Zhu said. “A Chinese withdrawal of personnel from cooperation projects as a result would be seen by terrorist groups as ‘success.’ Instead, it would lead to further incentive for them to launch terrorist attacks.”
China stands ready to work with Pakistan to strengthen strategic communication, promote cooperation on such major projects as the China-Pakistan Economic Corridor, and strengthen bilateral personnel exchanges on the condition of effective epidemic prevention and control, said Chinese Premier Li Keqiang in Monday’s phone call