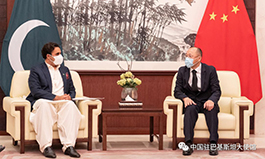 This is Bilawal’s first official visit to a foreign country after he took up the post in April, and will realize his wish to make China the first destination of his visit, Chinese Foreign Ministry spokesperson Wang Wenbin told a press conference on Friday.
On April 27, the day Bilawal was sworn in, he visited the Chinese Embassy in Paki-stan to send condolences to the Chinese victims of the terror attack at the Confucius Institute at the University of Karachi in Pakistan.
He said that Pakistan strongly condemns terror attacks that target Chinese citizens and Pakistan’s cabinet has decided to enhance security for Chinese citizens, Chinese projects, and institutions in Pakistan.
The friendship between China and Paki-stan has a long history. China has helped Pakistan many times and contributed largely to Pakistan’s development. Pakistan would not allow any force to hurt the two countries’ all-weather friendship and cooperation, Bilawal stressed.
On Wednesday, Bilawal flew to New York to attend a ministerial meeting at the UN headquarters and met with US Secretary of State Antony Blinken, US media reported.
Chinese State Councilor and Foreign Minister Wang Yi will have a meeting with Bilawal and exchange views on bilateral relations and issues of common concern.
Wang Wenbin said that as “all-weather” strategic cooperative partners, it is necessary for China and Pakistan to improve communication and coordination on major issues to deal with changes in the region and risks and challenges.
China hopes to use this visit as an opportunity to carry on with the traditional friendship with Pakistan, consolidate strategic mutual trust, and further deepen the all-weather comprehensive strategic partnership to build a closer China-Pakistan community with a shared future, said the spokesperson.
This Saturday, May 21, also marks the 71st anniversary of the establishment of diplomatic relations between China and Pakistan.
Ever since Shahbaz Sharif was elected Pakistan’s new prime minister, he has highlighted the friendship between Pakistan and China, which was also echoed by the Chinese Foreign Ministry.
Two days after Sharif was sworn into office, he met with the charge d’affaires of the Chinese embassy in Pakistan. Analysts said that China-Pakistan relations are expected to remain the key focus of the two countries.