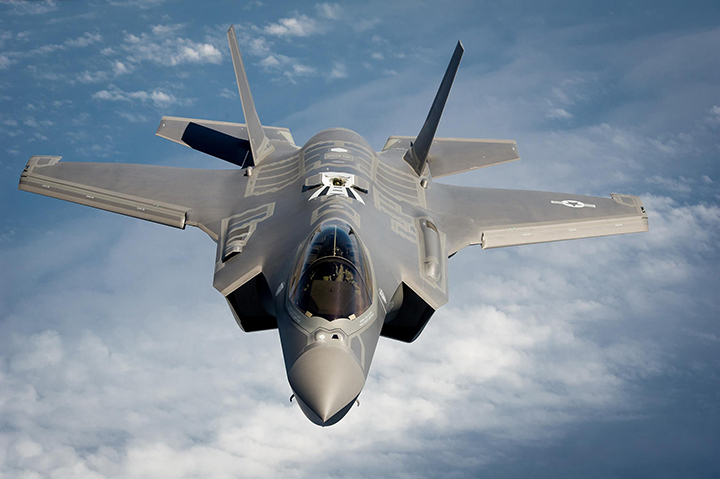 WASHINGTON — The Pentagon has temporarily halted deliveries of F-35 fighters following the discovery that the raw materials used for a magnet in the plane were produced in China.

In a release Wednesday, Lockheed Martin said a magnet in the F-35?s Honeywell-made turbomachine — an engine component that provides power to its engine-mounted starter/generator — was recently discovered to have been made with cobalt and samarium alloy that came from China.

Lockheed said the alloy for this part is magnetized in the United States.

Company spokeswoman Laura Siebert said magnets on F-35s already delivered will not be replaced with magnets made from non-Chinese materials because the Pentagon has decided the magnets are safe for flight and do not put sensitive program information at risk.

Russell Goemaere, a spokesman for the F-35 JPO, confirmed the magnet doesn’t transmit information or endanger the plane, and said flight operations for F-35s already delivered and in service will continue unchanged.

But due to a concern about compliance with the Defense Federal Acquisition Regulation Supplement, or DFARS, the F-35 Joint Program Office has ordered the Defense Contract Management Agency to stop accepting F-35s for now.

Lockheed Martin said that, going forward, turbomachine production will use magnets made from another alloy using materials from the U.S.

Bloomberg first reported the news about the delivery halt.

In a statement to Defense News, Honeywell said it “remains committed to supplying high-quality products that meet or exceed all customer contract requirements.”

“We are committed to working closely with DoD [the Department of Defense] and Lockheed Martin to ensure that we continue to achieve those commitments on products Honeywell supplies for use on the F-35,” the company added.

Goemaere said in an email to Defense News that the Defense Contract Management Agency notified the office about the possible regulatory noncompliance of the magnet alloy on Aug. 19, and the noncompliance was formally confirmed Sept. 2.

An investigation is now underway to understand how the Chinese materials slipped through the process and to fix the problem. Goemaere said the contractors involved have found a new source for this alloy to be used for future turbomachines.

Lockheed said that Honeywell told it about the Chinese-sourced alloy in late August. That disclosure came after Honeywell learned from one of its suppliers that another supplier had used alloy sourced from China for its magnets.

“We are working with our partners and the DoD to ensure contractual compliance within the supply chain,” Lockheed said. “The magnet has no visibility or access to any sensitive program information. The F-35 remains safe for flight, and we are working with the DoD to resolve the issue as quickly as possible to resume deliveries.”

It is unclear how long the halt in deliveries will last, Lockheed said, but added that the company remains on track to deliver 148-153 of the fighters in 2022. So far, 88 F-35s were delivered this year.

Fighters that are already finished but not delivered will stay with Lockheed until deliveries are cleared again.

ockheed said in its release it is working with the Pentagon to solve the problem, and is providing information to the JPO that might be needed for a possible national security waiver allowing the delivery of fighters with the Chinese alloy.

If the government decides a national security waiver is needed, the undersecretary of defense for acquisition and sustainment, William LaPlante, will have to make a written determination that it is in the national security interests of the United States to accept the F-35s with the Chinese materials.

The F-35 is made of 300,000 parts from more than 1,700 suppliers, Lockheed said. The company also said all supplier parts are inspected at each stage of production.