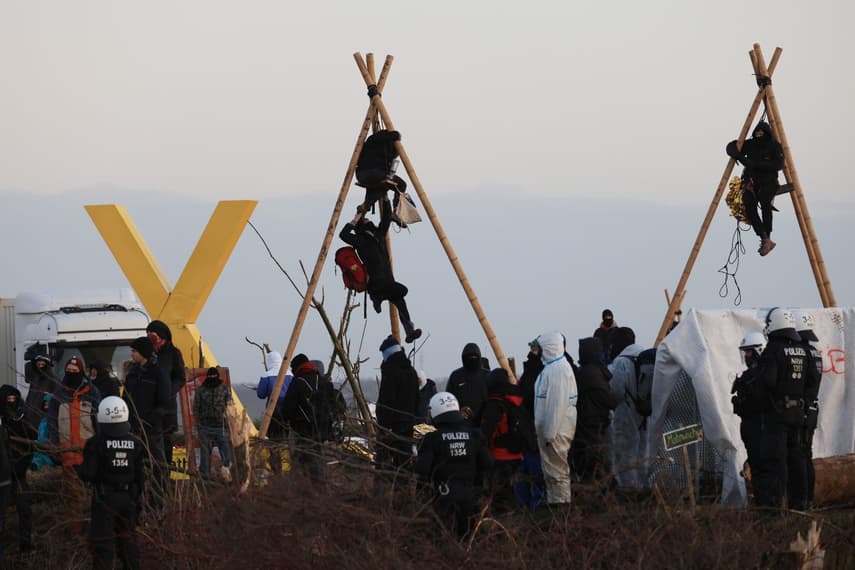 Lützerath, Germany, Jan 10 (AFP/APP): German police on Tuesday began removing climate activists perched precariously on high structures as they embarked on a “dangerous” operation to evacuate a protest camp that has become a symbol of resistance against fossil fuels.
Luetzerath, a village in North Rhine-Westphalia state, was once home to around 100 people but has been abandoned over the years as uncertainty hung over its planned evacuation for the expansion of the neighbouring coal mine Garzweiler.
Since the last resident, a farmer, packed up and left in October 2022, the village has been turned over to around 2,000 anti-coal activists who are trying to prevent the site from being dug up for coal.
The activists have built barricades and dug trenches to stop police getting in. Some are also swinging on hammocks erected high up above ground.
The protesters have vowed that there will be “no limits” in its defence of the site, and that they would make an “active defence” of the village.
“We’ve left a few surprises for the police,” said Joey, 28, a balaclava-clad former surgical assistant who is now a veteran of the occupation of the village.
“Most of the people will choose a passive defence (of the village), but others will act with active defence. There will be no limit.
“It may sound harsh but there are bigger things coming with climate change, people are dying”.
Joey said he only fears the violence could escalate the longer the occupation goes on and far from the watchful eye of the media, who will be forced to leave once the operation begins.