Poll: Half of Americans Say Sending Troops to Afghanistan Was ‘A Mistake’ 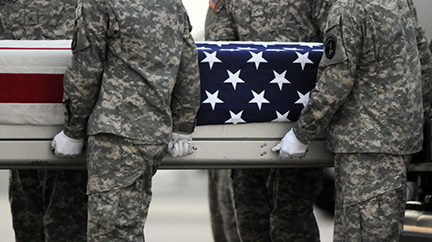 Nearly half of Americans believe it was a mistake to send U.S. troops to Afghanistan, according to a poll released this week, one year after the disorderly American withdrawal.

During the final weeks of the withdrawal, 13 American service members were killed in an Islamic State terrorist attack while helping Afghans evacuate from the airport in Kabul. The world also saw a grim preview of what the country would be like without an American presence, including Taliban forces taking control of the capital city, and Afghans vainly trying to escape by clinging to military planes as they took off.

Even though the war lasted 20 years, those recent images are likely to long shape how Americans perceive the entire conflict, said Madiha Afzal, a foreign policy fellow at the Brookings Institution.

“The fact that the Taliban A) took over, and B) that the withdrawal was so chaotic in the end, it really led them to question the whole war to begin with,” Afzal said. “The fact of the matter is we started with defeating the Taliban in 2001. Twenty years later, after 20 years of sacrifice and money spent and lives lost on the American side and on the Afghan side, in the end you have the Taliban back in power again.”

Even a year later, the hasty withdrawal from Afghanistan is still seen as the most important moment of the war, according to a YouGov poll released Monday by the Veterans and Citizens Initiative that polled 1,000 people in July. One-quarter of those polled listed the withdrawal as one of the five most important events of the conflict, followed by 17 percent who said it was the killing of Osama bin Laden. The most popular response, at 30 percent, said they couldn’t list five important events from the war.

More broadly, people questioned the value of the conflict. Nearly 50 percent said it was a “mistake” to send American troops to Afghanistan. Almost half of those polled also said that America “did not end the war with honor.” Just one-quarter believed troops were fighting for “a righteous cause,” and 22 percent thought the war improved American security.

The results show how much public perception has changed. In a 2019 survey, only about one-third of respondents said they believed it was a mistake to invade Afghanistan in 2001. The majority of respondents, 38 percent, said deploying forces was the “correct choice.”

Shibley Telhami, a University of Maryland professor who worked on the 2019 poll, said the change isn’t a surprise given the state of the country one year later, as interpreters who worked with the U.S. are being killed and women have lost many of the rights they had when the United States was involved.

“After such a heavy investment in blood and treasure, you go back to a situation where the Taliban, the regime the U.S. sought to overthrow and did overthrow…is now back in power,” Telhami said. “It wouldn’t be surprising for people to say, ‘Maybe it wasn’t worth it.’”

The Biden administration has consistently stood by its decision to withdraw from Afghanistan, despite the chaotic exit last August. As John Kirby, the National Security Council’s coordinator for strategic communications, briefed reporters on Wednesday, he noted that many of the questions were about Russia’s invasion of Ukraine or China’s escalatory actions around Taiwan.

“By ending that war in Afghanistan, [Biden] has allowed the United States military to be on a stronger strategic footing to try to face the threats and challenges we’re facing now,” Kirby said.

The poll also asked Americans about major events from past wars, including the Vietnam War and World War II. The Tet Offensive and the fall of Saigon were the top events in Vietnam, each at 9 percent, but one-third of respondents couldn’t name five important events from Vietnam.

People were much more likely to be able to name important events from World War II. Asked about their top five events, 30 percent listed Pearl Harbor, 27 percent listed D-Day, and 25 percent listed the dropping of the first nuclear bombs.

The difference in public memory is both a result of time, since these World War II events are widely taught in history classes, as well as the nature of the conflict, where counterterrorism operations like Afghanistan are less likely to have well defined milestones against a clearly identified enemy, said Javed Ali, a professor at the University of Michigan and a former member of Donald Trump’s national security council.

“You’re not going to have a defining moment where you can declare victory over your adversary or enemy,” Ali said. “They’re not wearing uniforms, and even when they have taken a punch or are under a lot of pressure, they don’t stand up and say, ‘Yes, United States, you got us.’…You’re not going to get the battleship-Missouri moment in 1945 that people remember.”