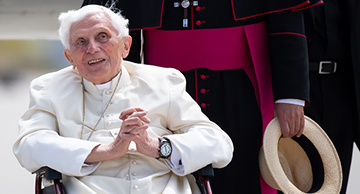 Vatican City, Dec 28 (AFP/APP): Pope Francis said Wednesday that former pontiff Benedict XVI, 95, is “very ill”, and urged people to pray for him before going to be by his side.
Benedict, who in 2013 became the first pontiff to resign in six centuries, has been in increasingly frail health.
“I would like to ask all of you to pray a special prayer for Pope Emeritus Benedict,” Francis said at the end of his general audience at the Vatican.
“Remember him, because he is very ill, asking the Lord to console and support him.”
The Vatican confirmed Benedict’s health has worsened “in the last few hours” and said Francis visited him after his audience.
“In the last few hours there has been a deterioration due to advancing age,” spokesman Matteo Bruni said in a statement.
“The situation at the moment remains under control, monitored continually by doctors.”
Benedict had cited his declining physical and mental health back in 2013 in his decision to become the first pope since 1415 to stand down as head of the worldwide Catholic church.
The German pope emeritus, whose real name is Joseph Ratzinger, has since lived a quiet life in a former convent inside the Vatican.
His resignation created an unprecedented situation in which two “men in white” — Benedict and his successor, Pope Francis — have co-existed within the walls of the tiny city state.