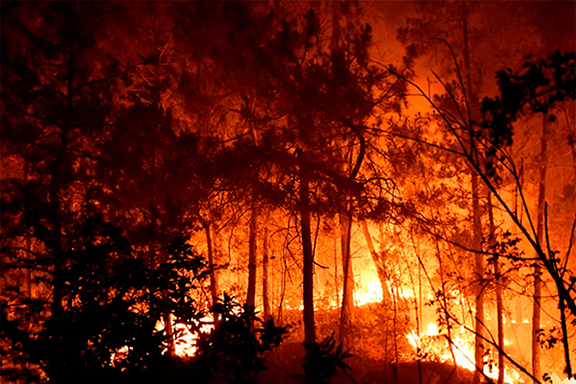 Ourem, Portugal, July 10 (AFP/APP): Around 2,800 firefighters were battling multiple wildfires in central and northern Portugal on Sunday amid a heatwave, prompting the government to implement a “state of contingency”.
The fires have been burning in several areas since Thursday, destroying at least two homes. Nearly 250 fires were reported to have started on Friday and Saturday.
The blazes come amid an intense heatwave in Portugal, with temperatures reaching over 40 degrees Celsius (104 degrees Fahrenheit) this week and are expected to rise in the coming days.
Scientists say extreme weather events such as heatwaves and droughts are linked to climate change. They are expected to become even more frequent, more prolonged, and more intense in the future.
On Sunday the Portuguese government issued a national “state of contingency”, which puts rescue services on alert. It is above a state of alert but beneath a state of calamity and a state of emergency.
The Civil Protection agency said some 1,500 firefighters were battling blazes in Ourem, Pombal, and Carrazeda de Ansiaes municipalities.
“The fire got 50 metres (165 feet) from the last house in the village,” pensioner Donzilia Marques, from the hamlet of Travessa de Almogadel in central Portugal, told AFP.
“Up there everything burned,” the 76-year-old said, pointing to the hills between her home and the town of Freixianda.
More than 700 soldiers were dispatched to the area on Sunday after the fires destroyed an estimated 1,500 hectares (3,700 acres) of vegetation, the Civil Protection agency said.
The fires have injured around 40 firefighters and civilians. Most were treated on the spot for breathing problems or exhaustion.
Prime Minister Antonio Costa cancelled a planned trip to Mozambique to keep track of the fires.
The government has asked the European Union to trigger its common civil protection mechanism, which will allow Portugal to access two water bomber planes stationed in Spain.
“We are facing an almost unprecedented meteorological situation”, national civil protection commander Andre Fernandes said on Saturday.
Portugal regularly sees extreme weather this year. Extreme drought affected around 28 percent of the country in June. In May, 97 percent of the country suffered severe drought and one percent was classed as extreme.