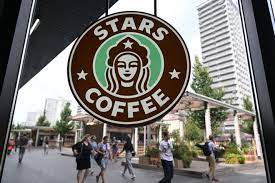 Moscow, Aug 19 (AFP/APP): Re-branded as Stars Coffee, the successor of Starbucks welcomed its first visitors in Moscow on Friday after the Seattle-based coffee shop chain withdrew from the Russian market over the conflict in Ukraine.
Pro-Kremlin rapper Timati and Russian restaurateur Anton Pinskiy acquired Starbucks’ Russian operations in July and gave it a new name under the slogan “bucks is gone, stars stay”.
“Why STARS? The new brand unites the stars of the gastronomic industry,” the new owners of the coffee chain said on their website which also features its new logo.
Looking very similar to its predecessor, the logo replaces Starbuck’s iconic twin-tailed mermaid with a woman wearing a traditional Russian headdress, the kokoshnik.
Patrons will find familiar caffeinated beverages on the menu but no Starbucks-patented Frappuccinos.
The new chain will also continue the Starbucks tradition of writing customers’ names on cups when taking their order.
Arina, a 20-year-old student with a cup of coffee in hand, said she “doesn’t see any difference for the moment: the taste is the same in any case and the interior and everything remain the same”.
But Ekaterina, 25, said she misses Starbucks “because I have a collection of their mugs and cups”.
Starbucks temporarily closed its 130 coffee shops in Russia at the start of Moscow’s February military intervention in Ukraine, later announcing that it will permanently leave the Russian market after nearly 15 years.
The coffee shop chain joined an exodus of brands quitting Russia over the Ukraine offensive, including fast-food giant McDonald’s that was also re-opened with a new name and logo.
The owners of Stars Coffee said that all of the chain’s locations across Russia will be opened by the end of September.
Most of them will remain coffee shops, while some will become restaurants.
They also said that some 80 percent of Starbucks’s 2,000 employees in Russia opted to stay after the change of management.