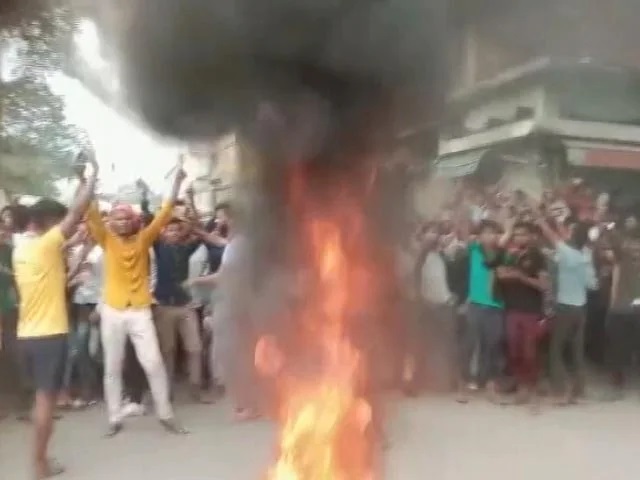 New Delhi has announced a new military drive named ‘Agnipath’ (the path of fire), in which men and women aged between 17-and-a-half and 21 years can join the Armed Forces for four years. Currently, India recruits soldiers for a minimum service period of 17 years.

Protests have triggered in some parts of India against the newly-proposed armed forces’ recruitment scheme –‘Agnipath’.
On Tuesday, the federal government announced the four-year recruitment plan to induct young citizens into the armed forces.
Under the new system, soldiers will get a fixed salary of $380 per month, of which approximately $127 will be paid at the end of their service in the fourth year. However, they will not get pensions or social security coverage.
After this, one-fourth of the recruited persons will be absorbed into the regular cadre of the armed forces.
The scheme, however, is evoking criticism from some opposition parties and among some young people who have been aspiring to join the armed forces for a longer period of time.
On Wednesday, demonstrators blocked highways and railway lines to protest against the scheme in Lucknow, Uttar Pradesh , and in Bihar state’s Buxar and Muzaffarpur Districts, reported Indian news channel NDTV.
In Rajasthan state, protesters opposing the ‘Agnipath’ scheme blocked the Delhi-Jaipur highway to express their anguish against the government.

Expressing his dissatisfaction over the newly-proposed scheme, an 18-year-old armed forces aspirant Divyanshu Pokhriyal, said, “I wanted to get into the Indian army and have been preparing for it since I was 16 years old. The government had already halted recruitment into the armed forces for two years due to the COVID pandemic.”
“Now, suddenly I’m told that a new scheme will come into force for four years. As of now, I don’t even know if I’m eligible,” he added.
Protesters are demanding an extension of the scheme’s tenure and the inclusion of a pension option.
Some of them want 20 to 30 percent of the recruits to be ensured other government jobs once a person completes four years of service under the new scheme.
The armed forces’ scheme has also sparked criticism among politicians.
Congress Parliamentarian Rahul Gandhi termed it an “uncalled for” move at a time when India is facing threats on two fronts (implying China and Pakistan).
“When India faces threats on two fronts, the uncalled for Agnipath scheme reduces the operational effectiveness of our armed forces,” Gandhi tweeted.
“The BJP govt must stop compromising our forces’ dignity, traditions, valour & discipline,” added Rahul.
Meanwhile, Bharatiya Janata Party (BJP) parliamentarian Varun Gandhi also questioned the short tenure of service under the new scheme, “Even the government gets elected for five years. Then why are only four years given to the youth to serve the nation?”
Bihar’s Rashtriya Janata Dal politician Tejashwi Yadav said, “Under the Agnipath scheme a large population which is trained to use arms will become unemployed at the age of 22 years, after serving for a temporary short period. Will it not lead to a law and order situation in the country?”
Major General (Retired) Satbir Singh told media that the scheme is not in line with the established military traditions, ethos, morals and values.
In the latest development, protesters have threatened to march toward Delhi if the government failed to take appropriate measures to amend the armed force scheme as desired by them.
Many of the protesters are also scheduled to hold a protest on Thursday outside the BJP’s district party offices across the country.