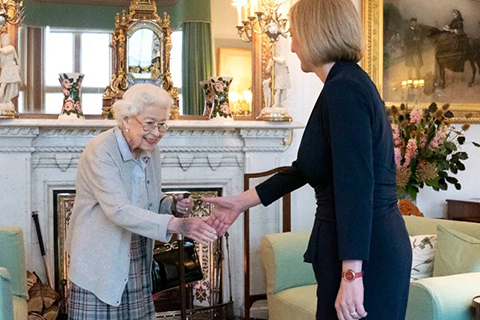 Liz Truss became Britain’s next prime minister after meeting with Queen Elizabeth II, who asked her to form a new government.

Truss, 47, took office on Tuesday in the carefully choreographed ceremony with the monarch a day after the ruling Conservative Party announced that Truss was elected as its leader.

Her predecessor, Boris Johnson, formally stepped down during his own audience with the queen at her Balmoral estate in Scotland.

In his last speech as the prime minister, Johnson said earlier on Tuesday that his policies had given the country the economic strength to help people weather the energy crisis before he signed off with his typical bluster.

“I am like one of those booster rockets that has fulfilled its function,” Johnson said before getting into a car and leaving the gates of Downing Street for the last time as prime minister.

“I will now be gently re-entering the atmosp

On Monday, the Conservative Party’s 172,000 members elected Truss to lead their party.

On Tuesday afternoon, she is expected to make her first speech as leader of a nation of 67 million people anxious about soaring energy bills and a looming winter of recession and labour unrest.

Those problems have festered for the past two months because Johnson had no authority to make major policy decisions after announcing his plan to step down.

Speaking to Conservative Party members on Monday, Truss promised to “deliver” on the economy, the energy crisis and the overstretched healthcare system, though she offered few specifics on her policies.

On Sunday, Truss promised to unveil her plans for tackling the cost-of-living crisis within a week.