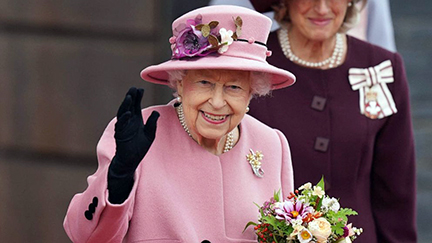 London, Sept 8 (AFP/APP): Fears grew on Thursday for Queen Elizabeth II after Buckingham Palace said her doctors were “concerned” for her health and recommended that she remain under medical supervision.
The 96-year-old monarch has been dogged by health problems since October last year that left her with difficulties walking and standing.
On Wednesday, she pulled out of a planned meeting with her senior political advisors, after being told to rest.
The previous day she held audiences at her Scottish Highlands retreat, Balmoral, with outgoing prime minister Boris Johnson and appointed his successor, Liz Truss.
“Following further evaluation this morning, the Queen’s doctors are concerned for Her Majesty’s health and have recommended she remain under medical supervision,” Buckingham Palace said in a statement.
“The Queen remains comfortable and at Balmoral,” the palace added.
The palace statement about the queen’s health is highly unusual.
Moments before, notes were passed to Prime Minister Liz Truss and senior members of her team in parliament, prompting them to leave the chamber.
Truss tweeted almost immediately afterward: “The whole country will be deeply concerned by the news from Buckingham Palace this lunchtime,” she added.
“My thoughts — and the thoughts of people across our United Kingdom — are with Her Majesty The Queen and her family at this time.”
Heir to the throne Prince Charles, 73, and his eldest son, Prince William, 40, were heading to Scotland, according to their Clarence House and Kensington Palace offices.