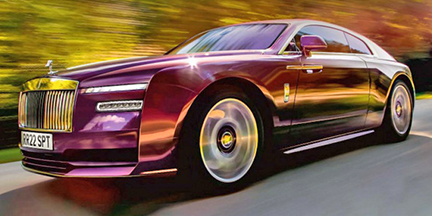 Rolls-Royce, the iconic luxury car maker, has accelerated into the electric age with the unveiling of the first non-petrol car in the company’s 120-year history.

The first models of the all-electric Spectre, which has been years in the design, planning, and testing stages, will be delivered to well-heeled customers toward the end of next year. The car will have a price tag in the $350,000 range, but customization and special features could double the cost.

Müller-Ötvös reaffirmed the company’s commitment to go fully electric by 2030 across all its car models, while continuing to sell petrol-fueled cars in the immediate future.

The move to electric vehicles, or EV, by Rolls-Royce will add to the competition by global car manufacturers to ditch the petrol-fueled internal combustion engine under pressure from environmental regulators.

Tesla, until now the market leader in EV, is facing challenges from other manufacturers such as Lucid Motors, backed by Saudi Arabia, as well as traditional car makers which have all launched EV models in recent years.

Since 1997, Rolls-Royce has been owned by BMW of Germany, which has itself announced big plans to go electric. But the move by the iconic luxury car maker — whose products are in demand by royalty, presidents and celebrities — is the most high-profile commitment yet to the age of electric motoring.

Müller-Ötvös said it was also part of the vision of Rolls-Royce, whose co-founder Charles Rolls said in 1900: “The electric car is perfectly noiseless and clean. There is no smell or vibration. They should become very useful when fixed charging stations can be arranged.”

It is unlikely that affluent Spectre owners will need a chain of charging stations. With an estimated range of 520 kilometers, the car will be mainly charged at home or at corporate offices, the company said.

The German-designed battery will provide sufficient power to speed the 3,000-kilogram car from standing to 100 kilometers per hour in an estimated 4.5 seconds.

Final specifications and performance figures are still being calculated as the Spectre goes through the last stages of an exhaustive testing process that has seen the car cover 2.5 million kilometers of advanced test tracks, and real driving conditions ranging from the Arctic tundra to the deserts of southern Africa, as well as the more sedate roads of the French Riviera.

The car is a refinement of the Phantom Coupe — although it was designed and engineered from the beginning as an electric vehicle — with two doors and four seats and is described as the most aerodynamic Rolls-Royce ever built.

The designers of the Spectre were influenced by “worlds far beyond automotive, including haute couture, modernist sculpture, nautical design, tailoring and contemporary art. In conceiving the principal sketches for the Spectre, the marque’s creatives were drawn to modern yacht concepts, specifically the clarity and precision of line, intelligent use of reflection and application of taper to emotionalize silhouettes,” Rolls-Royce said.

The traditional “pantheon grill” at the front of the car, topped by the Spirit of Ecstasy figurine, is the widest ever used by Rolls-Royce, and has been designed to ensure free air flow during driving and charging of the battery.

Drawing on yacht-building design, the rear of the car is the “most dramatic feature” of its silhouette, the company said, and helps create the lowest drag (airflow resistance) of any Rolls-Royce in history.

In the interior, the Spectre is packed with digital features that make it the most technologically advanced Rolls-Royce yet, with integrated functions to monitor the car’s performance, and allow owners to interact with the car remotely and receive live information from Rolls-Royce’s luxury intelligence specialists based in Goodwood.

Owners can choose from a variety of extra features designed and fitted by the Rolls-Royce “Bespoke” division, which can personalize the car to the owners’ detailed wishes.

Müller-Ötvös added: “Spectre possesses all the qualities that have secured the Rolls-Royce legend. This incredible motor car, conceived from the very beginning as our first fully electric model, is silent, powerful and demonstrates how perfectly Rolls-Royce is suited to electrification.”