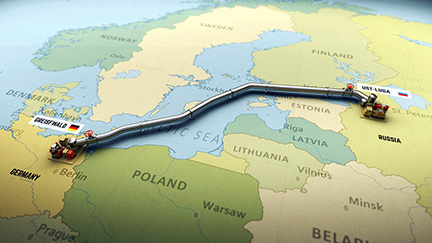 Dmitry Peskov rejected suggestions that Russia had blown up the pipelines as “absurd,” while the Russian prosecution declared the explosions an act of international terrorism.
Peskov spoke after Russian Foreign Ministry Spokeswoman Maria Zakharova said earlier on Thursday that the incident at the Nord Stream pipeline had taken place in the area controlled by US intelligence.
According to Russian Deputy Foreign Minister Alexander Grushko, Moscow is ready to consider requests from EU countries for a joint investigation into recent incidents on the Nord Stream offshore gas pipelines. The Russian mission to the United Nations has requested a UN Security Council meeting to discuss the attacks.

On Monday, Nord Stream AG pipeline operator told Sputnik that a dispatcher had registered a rapid gas pressure drop on Line A of the Nord Stream 2 pipeline, with the incident occuring in Danish waters near the island of Bornholm.
The operator later said that a pressure drop had been registered on both strings of the Nord Stream 1 pipeline. The Swedish and Danish authorities said they had detected undersea explosions, with the consensus being that the incident resulted from sabotage.
At the same time, operator Nord Stream AG called the destruction on the offshore gas pipelines “unprecedented”, adding that it was “impossible” to calculate the amount of time needed to rectify it.

The work of the Nord Stream 1 pipeline, which remains filled with gas, has been suspended since the end of August due to problems with the repair of turbines resulting from western sanctions slapped on Russia in response to its ongoing special military operation in Ukraine.
Boasting a capacity of 55 billion cubic meters of natural gas a year, the 1,224-kilometer (760 miles) main gas supply route to Europe is designed to deliver blue fuel through the Baltic Sea from the entry point in Russia’s Vyborg to the exit point in Germany’s Lubmin.
The construction of the Nord Stream 2 gas pipeline, stretching from the coast of Russia under the Baltic Sea to Germany, was fully completed in September 2021, and work was underway on the launch, which included both technical measures and obtaining regulatory permits, primarily from the German authorities. However, after Russia recognized the sovereignty of the People’s Republics of Donetsk and Lugansk (DPR and LPR), the German government stopped pipeline certification in February. German Foreign Minister Annalena Baerbock stated that “the project is actually frozen.”