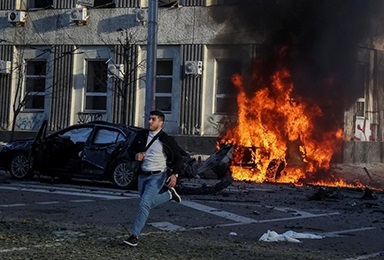 KIEV: Experts believe the bridge blast may free Russia from targeting only military facilities and that Moscow may extend its attacks against important Ukrainian administrative and political objects and important infrastructure, which will escalate the conflict to another stage.

Two days after the explosion damaged the Crimean Bridge, or Kerch Bridge, Putin accused Ukraine of attacking the infrastructure.

“Ukraine’s special services were the initiators, performers and masterminds,” Putin said when meeting with Chairman of the Russian Investigative Committee Alexander Bastrykin. The attack on the bridge was aimed at Russia’s “critical infrastructure,” Bastrykin said, calling it “an act of terrorism.”

“So, as you just reported, there is no doubt,” Putin said. “It was ordered, planned and carried out by the Ukrainian security services.”

Loud explosions were heard in the Ukrainian capital of Kiev on Monday morning, media reported. One of the rockets fell near the street where the Security Service of Ukraine is located in Kiev, and the office of the Ukrainian president is located nearby, Russian news agency RIA Novosti reported.

“Ukraine is under missile attack. There is information about strikes in many cities of our country,” Kyrylo Tymoshenko, deputy head of the president’s office, said on social media, calling on the population to “stay in shelters”.

Putin confirmed that Russian troops carried out a “massive strike with long-range precision weapons on Ukrainian objects of energy, and military control and communications.”

If Ukraine orchestrates further terrorist attacks against Russia, there will be a significant military response similar to the one launched on Monday, RT quoted Putin as saying.

Chinese observers predicted that a full-blown escalation of the Russia-Ukraine crisis would follow after the Russian authority’s recognition of the incident as an “act of terrorism,” as well as the attacks on Ukraine cities.

After the bridge blast on Saturday, Anton Herashchenko, an advisor to Ukraine’s Interior Minister, on Sunday urged the West to increase supplies of weapons to Kiev, fearing Russia’s response to the incident, Russian media Vzglyad reported.

However, Chinese experts said when the conflict has dragged on for almost eight months and is likely to further escalate due to the bridge blast, Western countries’ support, including weapon supplies to Ukraine, may actually dwindle.

“The US wants the conflict to exhaust Russia and Europe, not to have them perish together. Thus as the tension comes to a tipping point of being out of control, the West may jam on the brakes,” said Cui.

US stockpiles of the equipment that is essential to Kiev’s battle are “reaching the minimum levels needed for war plans and training,” and restocking to pre-crisis levels could take years, Mark Cancian of the Center for Strategic and International Studies wrote in a recent analysis, AFP reported in August.

“The military stocks of most [European NATO] member states have been, I wouldn’t say exhausted, but depleted in a high proportion, because we have been providing a lot of capacity to the Ukrainians,” Josep Borrell, EU’s high representative for foreign affairs and security policy, said earlier September.