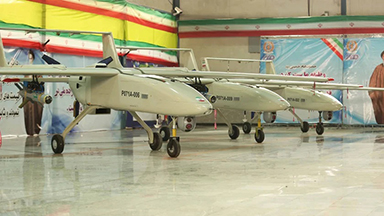 WASHINGTON: Russia has faced “numerous failures” with Iranian-made drones acquired from Tehran this month for use in its war with Ukraine, according to a senior US administration official.
The official, who spoke on condition of anonymity, said the United States assesses Russia has received the delivery of MoHajjer-6 and Shahed-series unmanned aerial vehicles (UAVs) over several days this month. The official said it is likely part of a Russian plan to acquire hundreds of such vehicles.
“We assess that Russia intends to use these Iranian UAVs, which can conduct air-to-surface attacks, electronic warfare, and targeting, on the battlefield in Ukraine,” the official said.
In July, US National Security Adviser Jake Sullivan told reporters the United States has information that shows Iran is preparing to provide Russia with up to several hundred drones.
The Biden administration last month released satellite imagery indicating that Russian officials visited Kashan Airfield on June 8 and July 5 to view the Iranian drones.
Iran’s foreign minister, Hossein-Amir Abdollahian, said last month that Tehran had “various types of collaboration with Russia, including in the defense sector.”
On Monday, Ukraine said it broke through enemy lines in several places near the southern city of Kherson as it pressed a new campaign to retake territory. Moscow said Kyiv’s counter-offensive had failed as Russia shelled the port city of Mykolaiv.