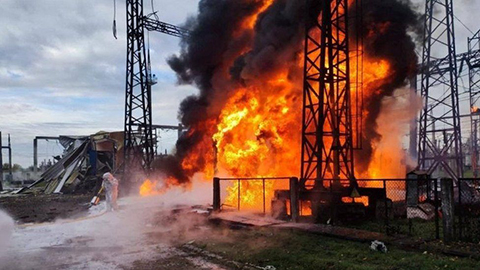 Kyiv, Ukraine, Dec 5 (AFP/APP): Ukraine was targeted on Monday by a new wave of fatal Russian missiles, the latest attack to cause massive power disruptions across the country and pile pressure on its embattled critical infrastructure as temperatures plunge.
Moscow in turn blamed Ukraine for drone attacks that caused explosions at two of its airfields, killing three soldiers.
The attacks came just after Russia shrugged off a Western-imposed price cap on its oil exports, warning the move would not disrupt its military campaign in Ukraine.
While the drone attacks on Russia’s Saratov and Ryazan regions were intercepted, the defense ministry said falling debris had caused the explosions.
At the same time, it claimed a “massive attack on Ukrainian military command systems and related defence, communications, energy, and military facilities”.
Fresh power cuts were announced in all regions of Ukraine due to the heavy strikes.
“Due to the consequences of shelling… a regime of emergency shutdowns will be introduced in all regions of Ukraine,” national electricity provider Ukrenergo said on Telegram.
The head of the central Zaporizhzhia region, Oleksandr Starukh, said Russian missiles on Monday had left two people dead.
Ukrainian President Volodymyr Zelensky said his country’s military had shot down a majority of Russian missiles fired earlier in the day, and engineers had already begun working to restore electricity.
“Our people never give up,” Zelensky said in a video-statement on social media.
Nearly half of Ukraine’s energy system has already been damaged after months of systemic strikes on power infrastructure.
Ukrainians have frequently been left in the cold and dark for hours at a time when the outdoor temperature has dropped below zero.
Officials told residents to charge power banks and prepare reserves of water.
The UN rights chief Volker Turk, who arrived Sunday in Ukraine on a four-day visit, had to move his meetings with activists into an underground shelter in the capital Kyiv as missiles rained down.