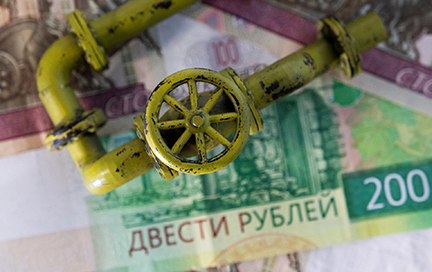 The Russian Finance Ministry has supported the idea of expanding the ruble-for-gas payments scheme to foreign sales of liquefied natural gas (LNG), as proposed earlier by the deputy department head at Gazprom Kirill Polous.
The ministry “strongly supports” the proposal, Finance Minister Anton Siluanov was quoted as saying by Russian business daily Vedomosti.
The Gazprom senior official proposed the move last week, speaking at a round table meeting with the State Duma Energy Committee.
According to Polous, the ruble-for-gas scheme, which is applied to exports of Russian natural gas to unfriendly nations, doesn’t currently include the sale of LNG, and is creating unwanted competition.
In March, Moscow demanded that the nations, which had imposed sanctions on Russia over its military operation in Ukraine, pay for natural gas in rubles. The scheme requires importers to open accounts in Gazprombank. They can then deposit funds in their currency of choice, which the bank converts to rubles and transfers to the supplier.
A number of European energy companies have complied with the new payment requirement. In May, Brussels issued updated guidance on how EU businesses can pay for Russian gas in rubles without breaching sanctions.
Those rejecting the gas-for-rubles scheme, including Finland, Poland, Bulgaria, Denmark’s Orsted, Dutch company GasTerra, and energy giant Shell, were cut off from Russian gas supplies.
Russia reportedly accounts for around 8% of global LNG supply, with 40 billion cubic metres coming mainly from Sakhalin-2 and Novatek’s Yamal LNG, Russia’s largest LNG plant. Last year, the country earned $7.3 billion from exporting the fuel, state tax service data shows, compared to $55.5 billion from piped gas exports.