Russia to get 2,000 more kamikaze drones from Iran 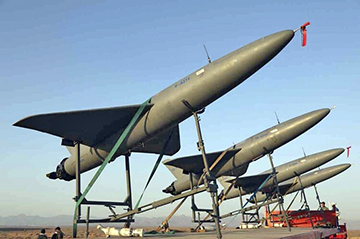 KYIV: Iran is in a military alliance with Russia and Moscow has ordered 2,000 more “suicide” drones from Tehran, Ukraine’s president said on Monday.

Volodymyr Zelensky Israeli leaders’ refusal to support Kyiv had encouraged Russia’s partnership with Iran.“This alliance of theirs simply would not have happened if your politicians had made only one decision … in 2014, when Russia began its aggression against Ukraine,” Zelensky said.
“The disgusting sound of Iranian drones is heard in our skies every night. According to our intelligence, Russia has ordered about 2,000 Shahed drones from Iran … and Iranian instructors came to teach Russians how to use them.”
Zelensky spoke as Western countries accused Russia of plotting to use the threat of a bomb laced with nuclear material as a pretext for escalation in Ukraine.
The row began when Russian Defense Minister Sergei Shoigu called Western counterparts on Sunday and told them Moscow suspected Kyiv of planning to use a so-called “dirty bomb”. The foreign ministers of France, Britain and the US said they rejected the allegations and reaffirmed their support for Ukraine against Russia.
“Our countries made clear that we all reject Russia’s transparently false allegations that Ukraine is preparing to use a dirty bomb on its own territory,” they said. “The world would see through any attempt to use this allegation as a pretext for escalation.”
Russia’s Defense Ministry said the aim of a “dirty bomb” attack by Ukraine would to blame the resulting radioactive contamination on Russia by accusing Moscow of detonating a low-grade nuclear weapon.
“The aim of the provocation would be to accuse Russia of using a weapon of mass destruction in the Ukrainian military theater and by that means to launch a powerful anti-Russian campaign in the world,” it said.
Zelensky said the Russian accusation was a sign that Moscow was planning such an attack itself and would blame Ukraine. “If Russia calls and says that Ukraine is allegedly preparing something, it means one thing: Russia has already prepared all this,” he said.
“So when today the Russian Minister of Defense organises a phone carousel and calls foreign ministers with stories about the so-called ‘dirty’ nuclear bomb, everyone understands everything well… understands who is the source of everything dirty that can be imagined in this war.”