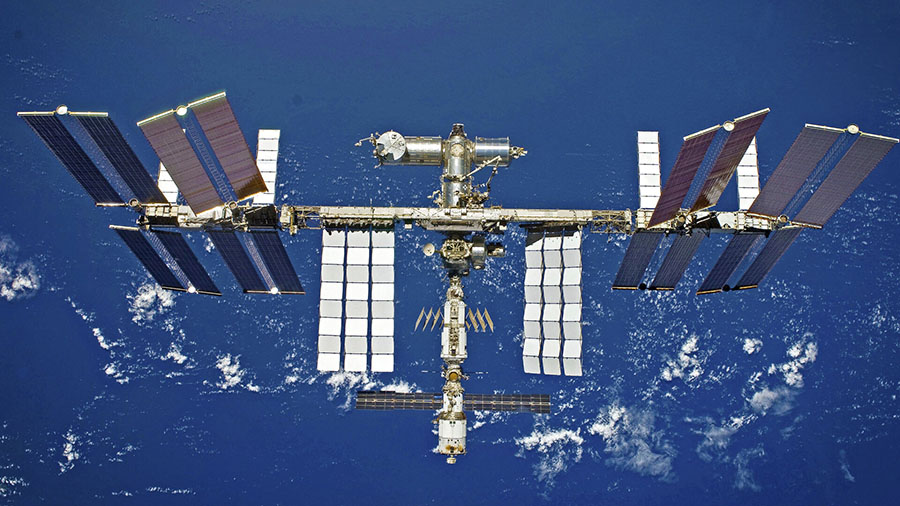 Moscow, July 27 (AFP/APP): Moscow said Tuesday it was leaving the International Space Station “after 2024” amid tensions with the West, in a move analysts warned could lead to a halt of Russian-crewed flights.
The confirmation of the long-mooted move comes as ties unravel between the Kremlin and the West over Moscow’s military intervention in Ukraine and several rounds of devastating sanctions against Russia, including its space sector.
Space experts said Russia’s departure from the International Space Station would seriously affect the country’s space sector and deal a significant blow to its programme of crewed flights, a major source of Russian pride.
“Of course, we will fulfil all our obligations to our partners, but the decision to leave this station after 2024 has been made,” Yury Borisov, the new head of Russian space agency Roscosmos, told President Vladimir Putin, according to a Kremlin account of their meeting.
“I think that by this time we will start putting together a Russian orbital station,” Borisov added, calling it the domestic space programme’s main “priority”.
“Good,” Putin replied.
The ISS is due to be retired after 2024, although US space agency NASA says it can remain operational until at least 2030.
The ISS was launched in 1998 at a time of hope for US-Russia cooperation following their Space Race competition during the Cold War.
The United States said it was taken by surprise by the announcement.
“It’s an unfortunate development given the critical scientific work performed at the ISS, the valuable professional collaboration our space agencies have had over the years,” State Department spokesman Ned Price said.
In a statement to AFP, NASA administrator Bill Nelson said the agency “has not been made aware of decisions from any of the partners, though we are continuing to build future capabilities to assure our major presence in low-Earth orbit”.
Until now, space exploration has been one of the few areas where cooperation between Russia and the United States and its allies had not been wrecked by tensions over Ukraine and elsewhere.

Russia is heavily reliant on imports of everything from manufacturing equipment to consumer goods, and the effects of Western sanctions are expected to wreak havoc on the country’s economy in the long term.
Space expert Vadim Lukashevich said space science cannot flourish in a heavily sanctioned country.
“If the ISS ceases to exist in 2024, we will have nowhere to fly,” Lukashevich told AFP. “At stake is the very preservation of manned flights in Russia, the birthplace of cosmonautics.”
Pointing to Russia’s growing scientific and technological isolation, Lukashevich said the authorities could not plan more than several months in advance and added that even if Russia builds an orbiting station, it would be a throwback to the 1980s.
“It will be archaic, like an old woman’s flat, with a push-button telephone and a record player,” he said.
Space analyst Vitaly Yegorov struck a similar note, saying it was next to impossible to build a new orbiting station from scratch in a few years.
“Neither in 2024, nor in 2025, nor in 2026 will there be a Russian orbital station,” Yegorov told AFP.
He added that creating a fully-fledged space station would take at least a decade of “the most generous funding”.
Yegorov said Russia’s departure from the ISS meant Moscow might have to put on ice its programme of manned flights “for several years” or even “indefinitely”.
The move could also see Russia abandon its chief spaceport, Baikonur, which it is renting from Kazakhstan, Yegorov said.
Russian Soyuz rockets were the only way to reach the International Space Station until SpaceX, run by billionaire Elon Musk, debuted a capsule in 2020.
The Soviet space programme can boast of a number of key accomplishments, including sending the first man into space in 1961 and launching the first satellite four years earlier. These feats remain a major source of national pride in Russia.
But experts say Roscosmos is now a shadow of its former self and has in recent years suffered a series of setbacks, including corruption scandals and the loss of a number of satellites and other spacecraft.
Borisov, appointed in mid-July, replaced Dmitry Rogozin, a firebrand politician known for his bombastic statements.
Rogozin had previously warned that without cooperation from Moscow, the ISS could de-orbit and fall on US or European territory.
In a possible sign of disagreement with Borisov, Vladimir Solovyov, chief designer at spacecraft manufacturer Energia, said Russia should not rush to quit the ISS.
“If we halt manned flights for several years, then it will be very difficult to restore what has been achieved,” he was quoted as telling the Russky Cosmos magazine.