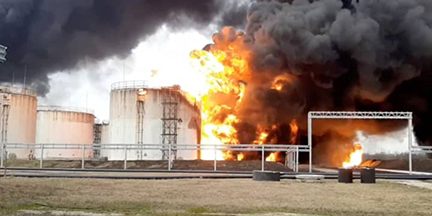 Russian forces carried out a rocket attack on a major oil refinery in Kremenchuk town in Ukraine’s central Poltava region on Thursday, said the head of Poltava regional military-civilian administration Dmytro Lunin.
“Today’s shelling of the Poltava region is perhaps the largest during the full-scale war,” Lunin wrote on Telegram.
Twelve rockets hit the infrastructure facilities in Kremenchuk, with most of them striking the oil refinery, Lunin said.
The attack caused fire at the oil refinery, Lunin said, adding there were no casualties in the shelling.
According to local media, the Kremenchuk refinery with a design capacity of 18.6 million tons is the largest oil refinery in Ukraine.
The facility suspended operation after it was struck by Russian missiles in early April.