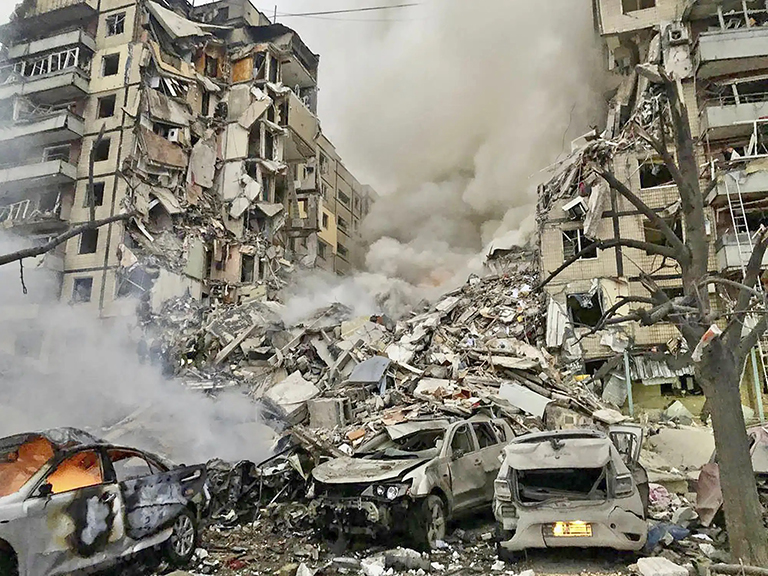 Russia has launched a new barrage of missiles at targets across Ukraine, killing at least 14 people in the eastern-central city of Dnipro and disrupting power supplies in the Kyiv and Kharkiv regions, officials said.

The attacks on Saturday smashed a nine-story apartment block in Dnipro, reducing an entire section of the building to rubble and sending smoke billowing into the sky. The deaths included that of a 15-year-old girl, according to officials.

Some 64 others were also wounded.

“Tragedy!” said Borys Filatov, mayor of the rocket-making city on the Dnieper River.

“I’ve gone to the site. … We will be going through the rubble all night.”

Pictures from the scene showed firefighters putting out a blaze around the carcasses of some cars in Dnipro. A broad chunk of the apartment block was missing, while the exterior of the rest of the building was badly damaged.

Trapped residents were signalling their location under the debris with their mobile phone torches, according to Ukrainian media reports.

“They keep sending SMS-es,” Mikhailo Lysenko, deputy mayor of Dnipro said in a social media video. “We stop our work now and then to keep silence and we hear people scream from underneath the rubble.”

“The fate of 26 people is still unknown,” he added.

Ukrainian President Volodymyr Zelenskyy said it was not yet known how many were under the rubble.