Satellite images show destroyed jets at the Russian base in Crimea 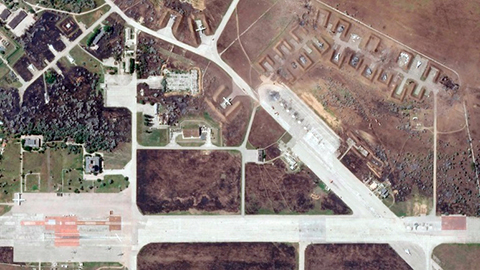 New satellite images show at least seven destroyed fighter jets at an airbase in the Russian-controlled peninsula of Crimea, shortly after Ukraine said nine planes were destroyed in a string of deadly explosions at the site.

The images, provided by Planet Labs PBC and taken mid-afternoon on Wednesday, undermine Russia’s claim that the explosions on Tuesday, which killed one and wounded 14, did not cause serious damage. Russia’s military has said no aircraft were destroyed in the explosions and has blamed the blasts on the detonation of stored ammunition.

Ukraine has not officially claimed responsibility for the explosions, although Ukrainian presidential adviser, Oleksiy Arestovych, has said the blasts were either caused by Ukrainian-made long-range weapons or were the work of Ukrainian fighters operating in Crimea, which Russia annexed in 2014.

Meanwhile, an unnamed Ukrainian official told The Washington Post on Wednesday the explosions were the result of an attack by Ukrainian special forces.

The satellite images showed about 2 square kilometres (0.75 square miles) of grassland burned at the airbase, which has housed the Russian 43rd Independent Naval Assault Air Squadron since Russia seized Crimea.

The base is at least 200km (125 miles) from the closest Ukrainian position.
Analysts have cast doubt that the damage could have been caused by an accidental explosion, with the Washington-based Institute for the Study of War saying that, while it could not independently determine what caused the explosions, simultaneous blasts in two locations at the base most likely rule out an accidental fire but not sabotage or a missile attack.

It added: “The Kremlin has little incentive to accuse Ukraine of conducting strikes that caused the damage since such strikes would demonstrate the ineffectiveness of Russian air defence systems.”

In a speech shortly after the attack, Ukrainian President Volodymyr Zelenskyy pledged to retake the peninsula.

Russian authorities said hotels and beaches in the region, a popular tourist destination for Russians, were unaffected by the blasts, although video online showed long lines of slowly moving cars on the road to Russia as tourists left the area.