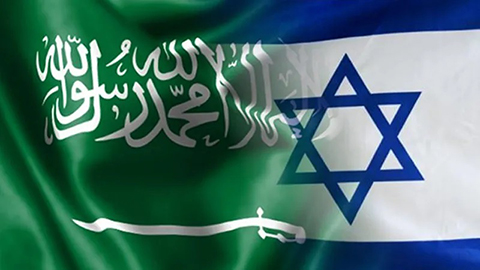 For some time, there has existed an Israeli-Saudi commercial relationship as Israeli businesspeople use Israeli passports to enter the kingdom, carrying out “big deals” while Saudi businesspeople and investment funds seek investment in Israel, Globes has revealed.
According to Arab48.com, Globes reported an informed Israeli source stating: “We have indirect relations with Saudi Arabi for more than 20 years. I do not remember that there had been economic development like what we are witnessing these days.”
Such relations have historically been carried out behind closed doors and mostly through firms registered in European or other countries, where security and civilian deals were reached and signed between businesspeople from the two countries.
For several months, Saudi Arabia has allowed Israeli businesspeople to enter its soil using special entry permission as well as their Israeli passports. Globes has revealed that the ban on the entry of Israelis had been recently lifted, and Israelis have started obtaining entry visas to Saudi Arabia, pointing out that tens of Israeli businesspeople visited Riyadh and other cities.
Former Israeli Prime Minister Benjamin Netanyahu visited Neom and met Crown Prince Mohammad Bin Salman in November 2020, in the presence of the then US Secretary of State Mike Pompeo.
Such exchanges of visits have resulted in deals worth millions of dollars.
“Away from direct diplomatic relations and direct money transfers, we have all that the countries need to have direct commercial relations, signing deals and exchanging goods and expertise,” an Israeli businessperson told Globes.
The Israeli economic news outlet reported that there has been an increasing Saudi interest, not only in tech start-ups, but also in several other Israeli products.
CEO of the Chamber of Commerce and Industry for trade between Israel and Gulf States, Nirit Ofir, commented, “what is notable is the fast progress between private sectors,” noting that businesspeople are not restricted by diplomatic issues.
Globes also reported a senior Saudi source stating that the number of applications applied by Saudi businesspeople seeking entry visas to Israel has increased. He indicated that Israeli and Saudi businesspeople meet and hold deals in Abu Dhabi and Manama.
Regarding diplomatic matters, another Saudi source told Globes: “The fact that Bin Salman approved direct investment and not indirect investment, as there has been until now, says that another barrier has been breached and direct and publicly open relations are coming nearer.”

Meanwhile according to the media, following a visit of a senior Israeli official to Saudi Arabia, speculation about the readiness to announce the normalisation of ties between the two sides has been increasing.
This came following a report by Israel’s Channel 12 broadcast on Friday revealing a recent visit of a senior Israeli official to Riyadh.
According to The Times of Israel, the Israeli official received a warm reception. The sides discussed regional security interests that have further aligned in recent years over common threats posed by Iran.
Yedioth Ahronoth also reported meetings between figures from both sides, without providing further details.
The reported meeting came as the US has pushed for cooperation between its allies in the region and preparing for US President Joe Biden to visit the Middle East.
According to The Times of Israel, senior US officials travelled to Saudi Arabia earlier this week, reportedly to finalise an agreement on transferring the Red Sea islands of Tiran and Sanafir from Egypt to Saudi Arabia.