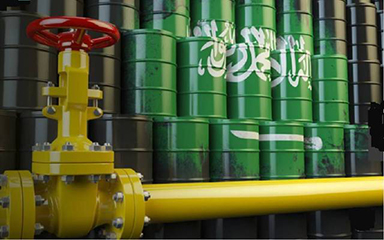 According to the Saudi statistics office, oil exports from the Kingdom reached $30 billion in March, with its crude production having risen to 10.3 million barrels per day that month, at an average of $112 per barrel. Almost $1 billion is made in profits per day, marking a 123 per cent increase year on year. This year alone, prices have risen by around 50 per cent.

The sharp rise in prices comes amid the Russian invasion of Ukraine, which was launched three months ago and has rocked markets throughout the world, including that of crude oil.

Despite the war and the western nations’ shunning of Russian oil exports, the Organisation of the Petroleum Exporting Countries (OPEC+) has decided that it will stick to only modest rises in oil production and that it is not possible to fill in the void left by the lack of Russian oil supplies to the European Union (EU).

Although the situation has caused the US and other countries to put pressure on Saudi Arabia to produce more oil, the modest output and rising prices have benefitted the Kingdom immensely, allowing it to achieve a budget surplus of 57.5 billion riyal ($15 billion) between January and March.

According to the International Monetary Fund, Saudi Arabia is now set to be one of the world’s fastest-growing large economies this year.

Despite its growth, Riyadh’s Energy Minister warned this month that energy capacity in all sectors is dwindling throughout the world, amid the high and increasing demand for oil and refined products.