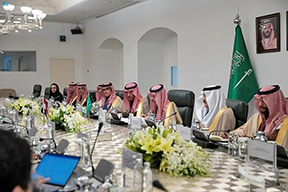 RIYADH: Iran must fully respect its obligations to international treaties and end its pursuit of nuclear weapons as part of a regional push for peace, urged a joint statement released by Saudi Arabia and Egypt on Thursday.

The statement was released following a meeting between Saudi Foreign Minister Prince Faisal bin Farhan and his Egyptian counterpart Sameh Shoukry, who is visiting the Kingdom. The two oversaw the fifth ministerial session of the follow-up and political consultation committee between the two countries.

During the meeting, they discussed intensifying joint political cooperation, ways to enhance bilateral coordination as well as regional and international developments.

The Kingdom congratulated Egypt on hosting the UN Climate Change Conference in November, adding that the success of the event demonstrates Egypt’s ability to promote new ideas in the international arena.

The two sides also praised joint efforts in organizing the second edition of the Middle East Green Initiative Summit in the resort city of Sharm El-Sheikh, co-chaired by Saudi Arabia and Egypt.

Arab security is “indivisible” and must be protected, the two sides said in the joint statement, stressing the need to continue coordinating efforts to support regional countries.

The Kingdom and Egypt also stressed the importance of achieving a just and comprehensive solution to the Palestine issue with the establishment of an independent and sovereign Palestinian state, agreeing to intensify regional and international coordination on the matter.

Both sides welcomed the consensus reached by parties regarding the transitional phase in Sudan and the signing of a framework agreement. The statement said: “The stability and prosperity of Sudan is an integral part of the security and stability of both the Kingdom and Egypt due to their geographical proximity.”

Riyadh and Cairo agreed to strengthen the International Atomic Energy Agency and encourage nuclear nonproliferation in the Middle East.

The two sides condemned attempts to undermine the security of the Arabian Gulf, the Bab Al-Mandab Strait and the Red Sea, stressing the importance of protecting freedom of navigation in pivotal sea lanes.

The Kingdom and Egypt reiterated their support for UN efforts to extend a truce in Yemen to reach a comprehensive political solution to the civil war.

Egypt praised the Kingdom’s efforts to promote dialogue between Yemeni factions and its role in providing humanitarian aid and economic support to the war-torn country.

In the joint statement, Cairo expressed concern over the Iran-backed Houthi militia’s “continued targeting of the security of international shipping lanes, which negatively affects global energy security and the stability of its supplies.”

Egypt noted its support for Yemen’s Presidential Leadership Council in ending the war.

The two sides also stressed their support of the UN-brokered Libyan dialogue.

They praised the role of the Libyan House of Representatives and the state in “fulfilling all the frameworks that allow Libya to move toward a better future.”

Presidential and parliamentary elections in Libya must be held as soon as possible, the statement said.

Saudi Arabia thanked Egypt for hosting and sponsoring Libyan constitutional talks in Cairo in coordination with the UN.

The Kingdom affirmed its full support for Egyptian water security as an integral part of Arab national security, and its full solidarity with all measures taken by Egypt to protect its waterways.

Saudi Arabia called on Ethiopia to avoid taking unilateral measures regarding the filling and operation of the Grand Renaissance Dam, and to show political will to reach a binding legal agreement that achieves its development goals and prevents harm to Egypt and Sudan.

The Kingdom and Egypt stressed the importance of supporting Iraq’s return to its position as a pillar of stability in the region.

They agreed on the need to preserve Syria’s independence and territorial integrity, promote the return of refugees and displaced persons as well as reach a political solution to the country’s civil war.

Lebanon’s security and stability is also of major importance, the statement said, with the two sides calling on political factions in the country to work in the national interest.