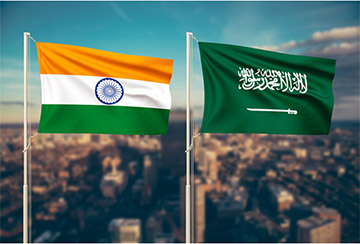 Saudi Arabia has partially outsourced the Hajj pilgrimage process to a company with ties to India’s far-right ruling party and its leader Narendra Modi, in what is yet another revelation regarding the kingdom’s reforms of the pilgrimage process.
Last week, Riyadh announced that potential Hajj pilgrims from Europe, United States, and Australia will now need to apply for visas and permits for the pilgrimage via the online government portal Motawif, with the intention of reportedly cracking down on “fake” travel agencies and fraud.
That new process – in which those selected would win their place through an “automated lottery” system and purchase their accommodation and flights directly with the Saudi government – signified a major overnight shift which essentially scrapped the decades-old system of using approved travel agencies.
In what further draws shade on the controversial change, however, it has now been revealed that the Motawif portal and its online application system has at least one investor with close ties to India’s ruling Bharatiya Janata Party (BJP), which has implemented anti-Muslim policies and plays a role in the persecution of Muslims throughout India.
According to a report by the London-based news outlet Middle East Eye, Prashant Prakash – the vice-president and partner at venture capital firm Accel India – was a key investor in the company which the Saudi government hired to set up the new Hajj application system.
Back in 2016, Prakash led the venture capital firm Accel India into a partnership with two other operations, which resulted in the investment of $7 million in the Indian-owned and Dubai-based company Traveazy, which was exclusively contracted by the kingdom to process the application of aspiring western pilgrims through Motawif.
That company then built a subsidiary named Holidayme, and in 2018 it also created Umrahme – a company dealing in the Islamic pilgrimage industry.
Even Forbes praised Umrahme as “one of only three companies authorised by the Ministry of Hajj & Umrah to sell Umrah products to global travel agents. By 2020, it was ranked fifth in…50 of the most funded start-ups in the Middle East.”
Since 2020, Prakash served on India’s National Startup Advisory Council, and the year after he became a policy and strategy adviser to Basavaraj Bommai, a key ally of prime minister Modi and the chief minister of the BJP-run government in the Indian state of Karnataka.
Throughout the years of BJP rule in India, its suppressive policies over the country’s Muslim population, and its role in spreading anti-Muslim sentiment and supporting Hundutva extremism, Prakash has praised Modi and his government on numerous occasions.
His firm Accel India has also been a long-time investor in Israeli start-ups, reportedly having invested over $350 million into the country’s industry between the years 2002 to 2016.
Aside from Prakash and the company’s close ties to the far-right Indian government and their economic ties with Israel’s economy, their role in the Islamic pilgrimage process becomes further controversial when critics bring up the possibility that the personal data of the many millions of Muslims’ who applied through the Motawif portal could be negatively used by those Prakash and Accel are affiliated with