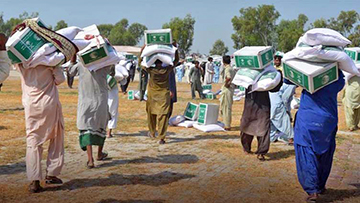 RIYADH: Saudi Arabia’s King Salman Humanitarian Aid and Relief Center (KSRelief) has continued to help those affected by the recent floods in Pakistan with the distribution of additional 995 shelter kits benefiting 6,965 residents.

Pakistan has been hit by extremely heavy monsoon rains that started early this year – in mid-June – with unprecedented floods destroying more than 1.5 million houses and drowning half a million livestock in the worst-hit province of Sindh alone.

More than 30 million people were left homeless by heavy rains and flooding, which many experts blamed on climate change.

Meanwhile, KSRelief’s demining project in Yemen has dismantled 958 mines during the fourth week of October.

Among the explosives, planted by the Houthi militants, that Project Masam cleared out included 8 anti-personnel mines, 284 anti-tank mines, 662 unexploded ordnance and four other explosive devices.

Since the beginning of the project, as many as 370,117 mines have been dismantled.