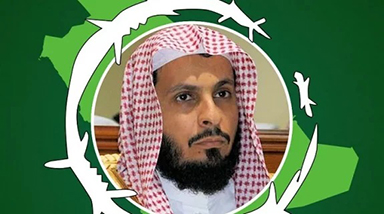 The Saudi Court of Appeals has sentenced Sheikh Saleh Al-Talib, a prominent imam and preacher at the Grand Mosque in Makkah, to ten years in prison, a human rights organisation said yesterday.

The organisation said the Court of Appeal overturned the Specialised Criminal Court’s decision acquitting Sheikh Al-Talib of the charges against him.

Forty-eight-year-old Al-Talib was arrested in August 2018, but no official explanation was issued for his arrest. He was an imam in Makkah at the time.

However at the time, the social media advocacy group Prisoners of Conscience, which monitors and documents the arrest of Saudi preachers and religious scholars, said Al-Talib was arrested after he delivered a sermon on the duty in Islam to speak out against evil in public.

Saudi Arabia has arrested dozens of preachers since the summer of 2017. Some for publicly calling for reconciliation between Gulf states when Saudi was spearheading a siege on