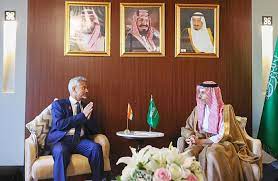 Saudi Foreign Minister Prince Faisal Bin Farhan Al Saud yesterday met with his Indian counterpart Subrahmanyam Jaishankar and discussed bilateral relations and ways to enhance them, the Saudi Press Agency (SPA) reported.
The agency said the meeting took place in the Indonesian island of Bali, on the sidelines of the meeting of the foreign ministers of the G20 countries.
The official agency added that the meeting dealt with bilateral relations and ways to support them in various fields to serve the interests of the two countries as well as to support stability.
This comes weeks after a diplomatic row erupted between New Delhi and the Gulf states over blasphemous remarks about the Prophet Muhammad (peace be upon him) made by a now-dismissed spokesperson for the ruling Hindu-nationalist BJP party, Nurpur Sharma.
The comments led to several Muslim countries, including Saudi, condemning India, while Iran, Qatar and Kuwait summoned their Indian envoys. Indian products in several Gulf states were also removed from shelves, amid calls on social media for an economic boycott of India.