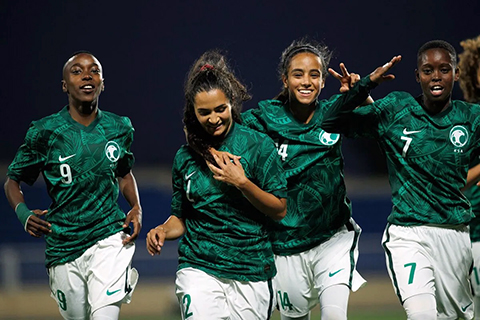 The team known as the Green Falcons, led by German coach Monika Staab drew 3-3 with visitors Bhutan at the Prince Sultan bin Abdul Aziz Stadium in Abha with a late equaliser in the 90th minute by Noura Al-Ibrahim. The Saudi team will face the same opponents again on Wednesday.

Staab was appointed as coach last year by the Saudi Arabian Football Federation (SAFF) of the then-newly established women’s national team, just under a year following the formation of the Saudi Women’s Football League.

“Win, lose or draw, these home matches are a historic moment in the transformative journey that women’s football is on in Saudi Arabia,” said Saudi Arabian Football Federation (SAFF) President Yasser Al-Misehal.

“As well as developing and improving on-pitch, the team’s impact is being felt by the number of women and girls throughout the country who are being inspired to play and follow football.”

Prior to yesterday’s match, the Saudi team only had two previous games against the Seychelles and Maldives in February, both ending in 2-0 victories and earned the praise of Brazilian football legend Pele.

On 15 September, the SAFF launched the first edition of the Saudi Women’s Premier League, with the participation of eight teams. The new season will start on 13 October, on a home-and-away basis, with a total of 56 matches, reported Arab News. The federation also approved the establishment of a Division One which will kick off in November.

The Saudi women’s national team and the domestic league are considered to be part of the kingdom’s Vision2030 under Crown Prince Mohammed bin Salman, with sports and female empowerment among the areas included in the social and economic reforms.

“Sports is an important part of the economy. Not only does football add to the economy directly through the commercial part or marketing part, but also to the economy in an indirect way,” SAFF General Secretary Ibrahim Al-Kassim was quoted as saying by Goal earlier in the week.

“The importance of football in the country’s Vision 2030 is evident in the fact that Saudi Arabia have bid for hosting rights of the 2027 Asian Cup and 2026 Women’s Asian Cup,” the article added.