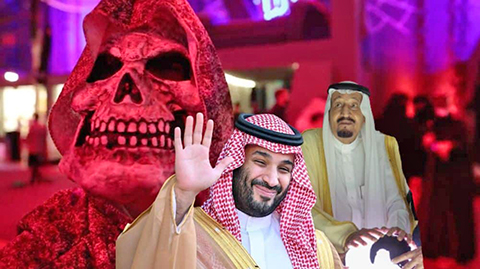 Saudi Arabia has hosted an event to celebrate the once-banned festival of Halloween, in a historic move for the Land of the Two Holy Mosques as the kingdom looks to implement social reforms intended to modernise the country under de-facto ruler, Crown Prince Mohammed Bin Salman.

Dubbed the “Scary Weekend” which took place on Thursday and Friday in Riyadh’s Boulevard, revellers dressed up in scary costumes and fancy dress and posed for pictures that have been widely shared on social media. The event was held as part of the ongoing Riyadh Season in the Saudi capital.

However, celebrations in the kingdom which had long been described as “ultra conservative,” have drawn criticism from some Muslim social media users over permitting once-banned non-Muslim festivals, while others have accused Saudi Arabia’s religious establishment of having double standards by not permitting the celebrations of the Prophet Muhammad’s (peace be upon him) birthday, known as Al Mawlid.

According to Arab News, “While Halloween has long been shunned across the Gulf, attendees at the event described the occasion as a form of harmless entertainment.”

“It’s a great celebration, honestly, and there’s a spirit of joy… In terms of haram or halal, I don’t know about it. We celebrate it just for the fun of it and nothing else. We don’t believe in anything,” one attendee who was taking part in the festivities for the first time was quoted as saying.

While another explained: “Actions are based on intentions. I’m just here to have fun.”

The “Scary Weekend” was the second costume-themed event to take place in the capital. A similar event, masquerade party took place earlier this year at Riyadh Boulevard Riyadh City on 17 and 18 March and was described as the largest costume party in Saudi Arabia.

A report by the New York Times suggested that the government-sponsored event was strategically held just before Halloween, which traditionally falls on 31 October so as not to be seen as officially commemorating the festival which has pagan roots.