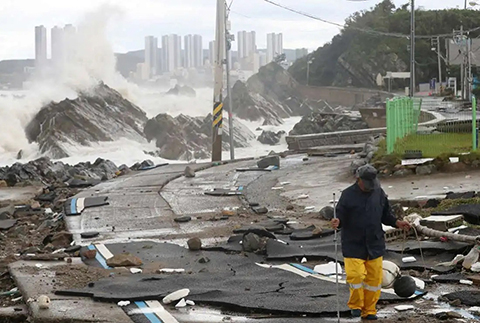 Seoul, Sept 7 (AFP/APP): The death toll from Typhoon Hinnamnor rose to 10 in South Korea, authorities said Wednesday, after the storm battered the southern coast with huge waves and heavy rain this week.
The typhoon, one of the most powerful to hit the country in decades, flooded streets and buildings as it passed through on Monday and Tuesday.
In the southeastern port city of Pohang — one of the hardest-hit areas — seven bodies and two survivors were pulled out of the submerged underground parking lot of an apartment complex, the Central Disaster and Safety Countermeasures Headquarters said.
The nine were trapped after they went into the parking lot to move their cars during the heavy downpours, according to local media reports.
Search and rescue operations continued on Wednesday, and authorities said two people were still missing.
One other death was confirmed in Pohang on Wednesday, and another in Gyeongju where a person was killed when a home was buried in a landslide, authorities said.
The nine fatalities follow the death of a woman in her 70s who died in Pohang after being swept away by floodwaters on Tuesday.
Hinnamnor forced more than 4,700 people to flee their homes for safety, and it destroyed around 12,000 homes and buildings.
Nearly 90,000 households lost power nationwide as the storm hit, but supply had been restored to most of them by Wednesday morning, authorities said.
Before the typhoon made landfall, South Korean authorities closed more than 600 schools nationwide as a precaution and local airlines cancelled some 250 domestic flights.