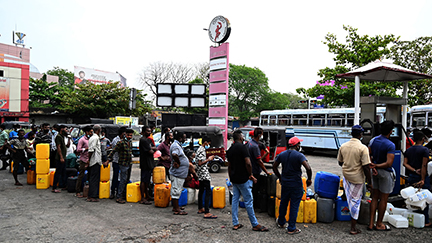 COLOMBO: Crisis-hit Sri Lanka announced weekly fuel quotas for motorists on Sunday, as an acute shortage worsened and longer queues formed outside the few pumping stations still operating.
Energy minister Kanchana Wijesekera said the state-run Ceylon Petroleum Corporation was struggling to finance oil imports, while consumption had shot up due to shortages of electricity and liquefied petroleum gas.
“We have no choice but to register consumers at filling stations and give them a guaranteed weekly quota until we are able to strengthen the financial situation,” the minister said.
“I hope to have this system in place by the first week of July.”
He did not say how much fuel motorists will be allowed to buy under the new system.
Sri Lanka has been struggling with its worst economic crisis in decades, with the country unable to import basic necessities such as food, fuel and medication due to a lack of foreign exchange reserves.
In mid-April, the government ordered all fuel stations not to pump more than four liters of petrol for a motorcycle, five for a three-wheeler and 19.5 liters of gasoline or diesel for cars and SUVs.
Under that system, many motorists would top up, drain fuel into cans to build a buffer stock, and then return to the queue for more.
This week, queues at fuel stations had become longer, with hundreds of cars and thousands of motorcycles waiting in line, sometimes for days.
Two weeks ago, Sri Lanka received a shipment of Russian crude oil to be refined on the island, but the finished product from the Sapugaskanda refinery was less than a tenth of the country’s daily requirement.
Around 90,000 tons of Siberian light crude was sent to Sri Lanka’s lone refinery after the shipment was acquired on credit from Dubai-based intermediary Coral Energy last month.
The Sri Lankan government has also approached Moscow’s envoy in Colombo to help secure direct supplies of Russian oil, Energy Minister Wijesekera said.
Sri Lanka defaulted on its $51 billion foreign debt in mid-April and has since opened talks with the International Monetary Fund for a bailout.
The United Nations has issued an appeal for $47 million to buy essential food for 1.7 million Sri Lankans in the next four months.
The worst economic crisis since the country gained independence in 1948 has sparked widespread protests calling for President Gotabaya Rajapaksa to step down.
He has refused, and instead got his brother Mahinda to step down as prime minister on May 9.
President Rajapaksa then appointed opposition politician Ranil Wickremesinghe to succeed Mahinda and help lead the country out of the unprecedented economic chaos.