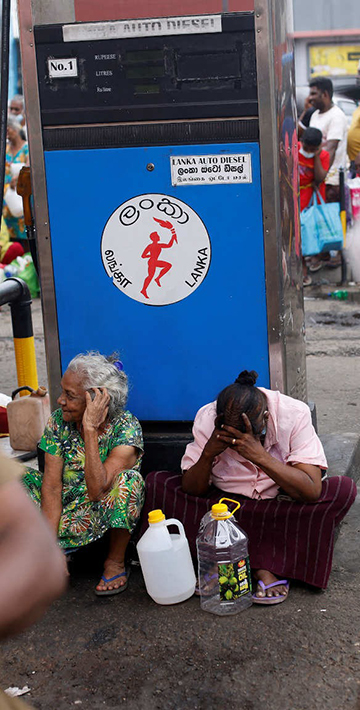 Sri Lanka has taken delivery of a consignment of Russian oil to restart operations at the country’s only refinery, the energy minister said.
The delivery of Russian crude oil – which could soon be subject to a European embargo – had been waiting offshore for over a month as Sri Lanka was unable to raise the millions to pay for it, Power and Energy Minister Kanchana Wijesekera told reporters on Saturday.
Sri Lanka will pay $72.6m to buy the 90,000-tonne shipment of Russian oil, the minister said.
“I have reached out to multiple countries, including Russia, for support to import crude and other petroleum products,” Wijesekera said.
The 90,000-tonne consignment was ordered through Dubai-based Coral Energy, the minister said, adding that the shipment would facilitate restarting the country’s sole refinery, which has been closed since March 25.
“The next shipment will also be ordered from the same company. Another consignment will be needed within the next two weeks to keep the refinery running continuously,” he added.
Colombo is in talks with Moscow to arrange direct supplies of crude, coal, diesel and petrol despite US-led sanctions on Russian banks and a global diplomatic outcry over Russia’s invasion of Ukraine.
“I have made an official request to the Russian ambassador for direct supplies of Russian oil,” Wijesekera told reporters.
“Crude alone will not fulfil our requirement, we need other refined [petroleum] products as well.”
Sri Lanka is suffering its worst economic crisis since independence, with shortages of fuel and other essentials making life extremely difficult for the island nation’s 22 million people.
The country’s efforts to secure fuel supplies came as European Union leaders were in talks to negotiate a fresh round of sanctions against Russia over the Ukraine conflict, including an oil embargo. Russian oil is already subject to a US embargo.
Sri Lanka’s state-run Ceylon Petroleum Corporation (CPC) refinery was shuttered in March following a foreign exchange crunch, which left the government in Colombo unable to finance imports, including crude.
The Sapugaskanda refinery on the outskirts of the capital Colombo will resume work in about two days to produce about 1,000 tonnes of diesel daily to meet the country’s acute fuel shortage.