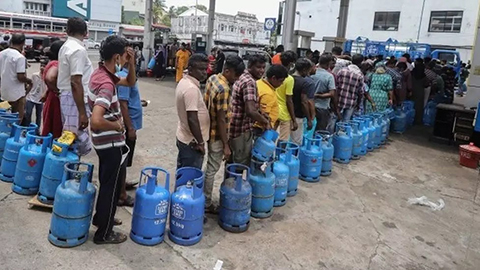 As Sri Lanka faces its worst economic crisis in seven decades, an energy catastrophe is looming for the country. Without the rapid formation of a new government that can introduce an interim budget and financial reforms, as well as financial support from neighboring countries, the country could soon run out of fuel and other essentials. There are well-founded fears that petrol stocks will soon run dry, with Minister for Power and Energy Kanchana Wijesekera announcing earlier this month that Sri Lanka had enough petrol left for less than a day, based on normal consumption levels, with just 12,774 tonnes of diesel and 4,061 tonnes of petrol left in its reserves. The next petrol shipment was expected over two weeks later. The country has already halted petrol and diesel sales for non-essential vehicles, but it could run dry even for these
Even if shipments of fuel arrive early, Sri Lanka does not have enough money to cover the cost as its economy is in a dire state. Despite making it past the initial fuel supply hurdles over the past few weeks, the country believes it will have to restrict its fuel imports for the next year because of a shortage of foreign exchange. Sri Lanka has faced shortages of essentials including fuel, food, and medicines, with no likely alleviation any time soon. This has mainly been blamed on poor economic management and the Covid-19 pandemic.
The previous Minister for Power and Energy, Gotabaya Rajapaksa, resigned earlier in July and fled the country following widespread protests due to poor economic management. Schools were mostly closed over the last month because of the lack of fuel, although they reopened this week. Meanwhile, public sector employees are working from home. Two fuel shipments by the second largest fuel retailer, Lanka IOC, of a combined 60,000 tonnes, are expected to ease some of the shortages in August. The firm’s managing director Manoj Gupta said“We are working collectively with the government to reduce the pain and our priority is to supply to industries.”
While it has some shipments planned, many suppliers are reluctant to trade with Sri Lanka, refusing to accept letters of credit from its banks. The country has around $700 million in overdue payments, forcing suppliers to ask for advance payments for shipments. It has previously been bailed out by India, which gave Sri Lanka a $500 million credit line, but this ran out in June. Now it worries that its scheduled shipments will not arrive, and the country could run out of fuel at any moment.
Last week, the government implemented a 12-22 percent rise in fuel prices, which is expected to push already elevated inflation rates higher. In addition, it introduced a “National Fuel Pass” as a means of rationing fuel, which provides people with a weekly quota based on the number plates of registered vehicles.
Last week, President Gotabaya Rajapaksa finally resigned and fled the country after months of protests. The UN now hopes a peaceful transition of power will help rebuild confidence in the state. Business confidence in Sri Lanka is extremely low at present, according to the chairman of the Ceylon Chambers of Commerce Vish Govindasamy. He stated, “Business confidence is probably at its lowest since I’ve been in business. It’s probably the most difficult times that we have faced. But we are resilient.” He added, “The businesses are making sure we survive through this difficult time… [but] reforms are absolutely necessary.
To gain confidence in the future of the Sri Lankan economy, a new government will need to introduce new fiscal reforms. It will largely depend on the successful and swift transition of power for the introduction of an interim national budget. Asanga Abeyagoonasekera from global think tank Millennium Project emphasized that Sri Lanka needs to “dismantle the autocratic footprint left by Gotabaya and democratize, bring back checks and balances and independent institutions.”
As well as establishing a new government and financial reforms, Sri Lanka will have to seek help from neighboring countries if it hopes to alleviate its financial situation. To improve its debt restructuring problem it will have to ask for support from China to provide debt relief and help speed up the process. Umesh Moramudali, lecturer at the University of Colombo explained “you can’t get out of this crisis without China,” adding, “China needs to agree to restructure its debt, which is not their usual path to take.”
China has already invested billions in Sri Lanka for its Belt and Road Initiative, meaning that it is in its interest to help the country rebuild its economy. Wang Wenbin a spokesperson for China’s foreign ministry said that “shortly after the Sri Lankan government announced to suspend international debt payments, Chinese financial institutions reached out to the Sri Lankan side and expressed their readiness to find a proper way to handle the matured debts related to China and help Sri Lanka to overcome the current difficulties.”
Support from China and India, as well as the swift formation of a government with new financial reforms, could help Sri Lanka to get a much-needed bailout from the IMF to begin to rebuild its economy. Deborah Brautigam, a professor from Johns Hopkins University, explained, “The IMF cannot… interact with the government when things are in a continuing crisis mode. So, until the government stabilizes, until they have a minister of finance, there’s no one for the IMF to talk with.” She added, “The IMF will not lend into a situation where they deem their money will not be repaid.”
Sri Lanka is facing ongoing economic turmoil and severe fuel shortages, leading many to worry about the country’s economic and energy security. However, there is still hope that the formation of a new government, alongside support from neighboring countries and the international community, has the potential to pull Sri Lanka out of this mess before it’s too late.