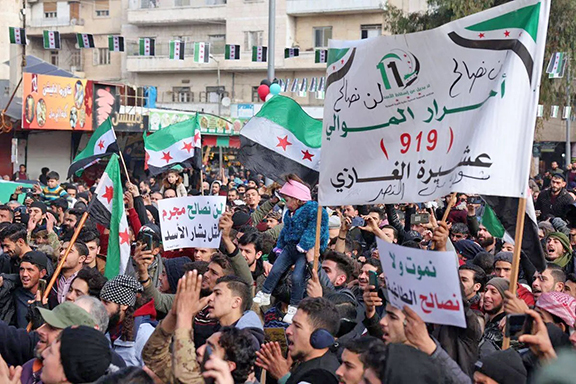 Syrians in most areas controlled by the Syrian opposition took to the streets on Friday to protest against the possible reconciliation between Damascus and Ankara, news agencies reported.

The protesters dismissed Head of the National Coalition of Syrian Revolutionary and Opposition Forces Salem Al-Meslet from the city of Azaz, northwest of Aleppo.

Senior leader of the Syrian Opposition Mohammed Sarmini confirmed that hundreds of protesters attacked Al-Meslet’s car, expelling him from the demonstration.

Syrians in the northwest of Syria have been protesting against the potential reconciliation between Syria and Turkiye for the third consecutive Friday.

According to Sarmini, the protesters took to the streets last Friday, raising placards reading: “We will not reconcile… We will return the revolution to its first days… Down to all of the opposition coalition members.”