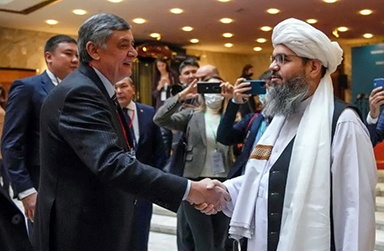 Kabul, Sept 28 (AFP/APP): Afghanistan has entered an agreement with Russia to procure millions of tonnes of petroleum products and wheat, Taliban officials said on Wednesday.
Russia has been hit hard by unprecedented Western sanctions over its invasion of Ukraine, causing Moscow to push exports to Asian countries to support its economy.
“The contract was agreed upon last month when the minister of industry and trade visited Russia,” Abdul Salam Jawad, spokesman for the ministry, told AFP.
He would not comment on any financial details.
The deal includes supplying Kabul with one million tonnes of gasoline, a million tonnes of diesel, 500,000 tonnes of liquefied petroleum gas (LPG), and two million tonnes of wheat, Jawad said.
The ministry of economy, in a separate statement, said the supplies from Russia are expected to arrive “in the next few weeks”.
Moscow confirmed that “preliminary agreements” had been negotiated with the Taliban.
“Now they (the two sides) have to sign concrete agreements on volumes and list of products,” Russia’s special envoy to Afghanistan, Zamir Kabulov, was quoted as saying by Russian state news agency TASS.
An economic crisis in Afghanistan has only worsened since the Taliban returned to power following the hasty withdrawal of US-led foreign forces last August.
The country’s banking sector has nearly collapsed after Washington froze $7 billion of Afghanistan’s assets held in the United States.

A two-year drought has affected the country’s food production.
Taliban officials have maintained that they are looking to strike trade deals with the international community, and have so far received oil and gas from neighbouring Iran.
The government has not yet been recognised by any country, but Russia has maintained bilateral ties with the Islamists since before they seized power last year.