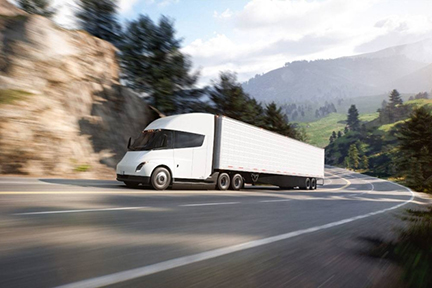 New York, Dec 1 (AFP/APP): After years of delays, US automaker Tesla is expected on Thursday to deliver its first battery-powered semi-truck, with which it hopes to get a jump start on the nascent electric heavy-duty vehicle market by offering longer ranges without recharging.
The Elon Musk-led company is scheduled to hand over the keys to its first electric truck — dubbed “Semi” — at its Nevada manufacturing plant to multinational food company PepsiCo.
With its sleek design, the Tesla electric semi has been highly anticipated since Musk unveiled a prototype in 2017, but the launch of full-scale production has been delayed well past the initial 2019 expectation.
Other manufacturers have meanwhile entered the market, from traditional truck makers such as Daimler, Volvo and China’s BYD, to startups like US company Nikola.
The competition has also begun to roll out their deliveries, and have many orders of their own waiting to fill.
However, the truck that “the market has been waiting for… is the one from Tesla,” says Dave Mullaney, a transportation specialist with the sustainability think tank RMI.
Legacy manufacturers have primarily converted their diesel-designed trucks to electric.
“The Tesla, on the other hand, was designed to be electric from the very first design,” says Mullaney, who also underlined the company’s 15 years of experience in electric vehicles.
If the Tesla vehicle lives up to expectations, “it’s going to be a huge difference,” Mullaney says.
In a tweet on Saturday, Musk said that one Semi had driven 500 miles (800 kilometers) with a total weight of 81,000 pounds (nearly 37 tons).
The electric vehicles currently on offer only have a range of 250 to 300 miles.

To carry heavy loads over such long distances, the battery “needs to be very large — that makes it very heavy, takes up a lot of space and is very costly,” says Mike Roeth, director of the North American Council for Freight Efficiency (NACFE).
“The industry has kind of been wondering whether you can physically package that much battery” and keep the truck’s weight low enough to be able to do the job, Roeth adds.
With the ability to travel up to 500 miles without recharging, long-distance trips in electric trucks would be much more feasible, allowing drivers to return to warehouses in the same day.
Even longer trips could be taken over several days if drivers can find charging stations at truck rest stops.
The use of electric light-duty vehicles for short-haul deliveries has been steadily growing for some time, but new regulations are pushing manufacturers and transporters to speed up the transition and build out long-haul capabilities.
The most populous US state, California, has passed a law phasing out combustion engine trucks, which has since been followed by other states.
The European Union is also expected to debate new standards in the coming months.
Companies are also facing pressure to have more environmentally conscious reputations.
They “want to be on the right side of history,” says Marie Cheron of the Europe-based association Transport & Environment.
Those who do not commit to a decarbonization strategy, some of whom say they are waiting for technologies to improve, “are falling behind,” she says.
Another motivation to transition, Roeth says, is that drivers who have been able to test them, “love the electric trucks a lot.”
“They’re very quiet, they don’t have the smells of the exhaust, and they are comfortable to drive.”