Thanks To TikTok, Ukraine Is Raining Missile On Russian Troops With Pinpoint Accuracy & To A Devastating Effect 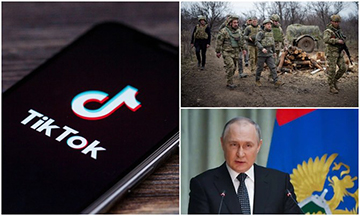 Ukrainian forces have been precisely targeting Russian troops, wreaking havoc on their command and control centers throughout the ongoing war.

However, it appears that the unapproved use of smartphones by Russian soldiers prompted Ukrainian forces to execute devastating missile attacks on the places where they were stationed.

Even during the initial stages of the invasion, some Russian soldiers advancing on Kyiv made telephone calls and posted videos to the social media platform TikTok, revealing their whereabouts to Ukrainian forces.

In early 2022, it was reported that military experts were using TikTok to track the movement of Russian tanks and other heavy armor.

Nearly a year later, despite a ban on personal cellphone use, Russian personnel still use them in the war zone to contact their families and put themselves in danger of Ukrainian bombings.

The military intelligence commander for Ukraine also confirmed that Ukrainian forces’ missile strikes against enemy positions exploited cellphone signals to increase the damage they inflicted on their targets.

The Russian military acknowledged the issue and blamed it for the enormous losses during a New Year’s Eve strike that resulted in the deaths of dozens of Russian soldiers, one of the worst since the invasion started.

Defense Ministry stated that it is now evident that the leading cause of what happened included the widespread use of personal cell phones in the range of hostile weaponry. The statement said that the cellphone data enabled Ukraine to pinpoint the coordinates of military service personnel’s whereabouts to launch a rocket strike.

That statement, however, was furiously rejected by a prominent military blogger and tacitly refuted by the commander of the self-proclaimed Donetsk People’s Republic (DPR) in eastern Ukraine, indicating dissent in the Russian leadership over Moscow’s reaction to the attack.

Furthermore, the statement from the Ministry of Defense was also criticized as “not convincing” and “an obvious attempt to smear blame” by Semyon Pegov, who blogs under the pen name WarGonzo and was recently personally presented with the Order of Courage by President Vladimir Putin at the Kremlin.

On the other hand, Ukraine’s military also mocked Russia’s defense ministry statement. On January 4, the Eastern Group of the Ukrainian Armed Forces spokesman, Serhii Cherevatyi, said, “Of course, using phones with geolocation is a mistake. But it is clear that this version looks a bit ridiculous.”

That being said, the incident triggered a rare acknowledgment of a high death toll in Russia. The Ukrainian military provided even more dramatic estimates, alleging that up to 400 Russian soldiers had been killed. The strike represents one of the bloodiest events in the war for Moscow’s forces.