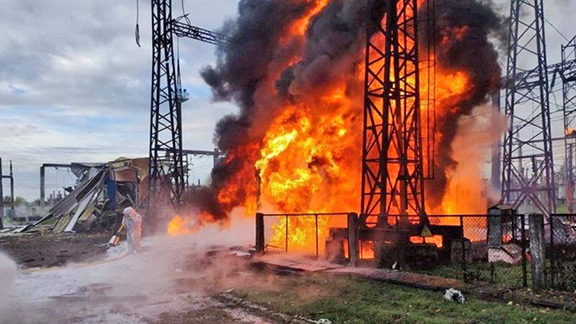 Kramatorsk, Ukraine, Dec 20 (AFP/APP): It has become a daily struggle for Ukrainian technicians: mending pipes damaged by Russian airstrikes in a desperate bid to keep the energy grid working in freezing temperatures, even as attacks continue.
“We repair. And if they destroy, we will repair it again. That’s the job,” Oleksandr, who declined to give his full time, told AFP while completing a welding task for a municipal company in the eastern industrial city of Kramatorsk.
His firm is responsible for heating and electricity in half the buildings in the city, which had a pre-war population of more than 150,000.
To keep up with the escalating workload, it now employs 40 technicians — double the number it needed before Russia invaded in February.
A few metres from where Oleksandr worked, a yellow excavator dug a trench for pipes.
The company used to have only one such machine and has been forced to rent a second from a private company.
Even with the extra resources, it can seem impossible to keep up with urgent tasks.
In a nearby trench marked off by tape, two large pipes needed for heating dozens of buildings were waiting to be covered.
They were hastily repaired after sustaining damage in late September, but the company hasn’t yet found time to finish the job.
“In normal times, this would have been done a long time ago. But we are short of time and equipment,” the company’s deputy director, Rinat Milushov, told AFP.

Kramatorsk is an administrative capital in the Donetsk region, which is partially controlled by pro-Russian forces and has witnessed fierce fighting since February.
The situation has improved after several settlements were retaken in a Ukrainian counteroffensive this autumn, but battles are still ongoing nearby, especially in the key town of Bakhmut, some 50 kilometres (30 miles) to the southeast.
Like all of Ukraine, Kramatorsk suffers from frequent power cuts following Russian strikes that have repeatedly left millions in the dark and without heat and running water.
The temperature in Kramatorsk is now just below zero degrees Celsius (32 degrees Fahrenheit), but later in the winter it can drop to a bone-chilling -15C or even -20C degrees.
“The workers work day and night to guarantee heating for the population, but each time the electricity is cut, they have to start over,” Milushov said, pointing out that systems need to be restarted “manually”.
He highlighted the stress placed on workers, who are paid the equivalent of around 150 and 200 euros a month — less than the average salary in Ukraine — as well as the potential long-term damage to the energy network.
“I have been working for 20 years. I’ve seen complicated situations, but what we are currently experiencing is without comparison,” Milushov said.
“We have to get used to this new rhythm,” he added.