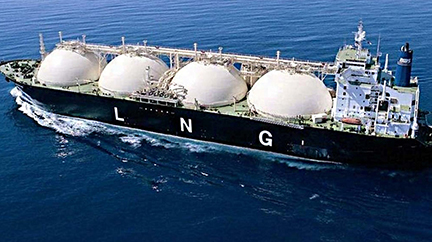 High demand in Europe, high natural gas prices, and increased export capacity made the United States the world’s largest exporter of liquefied natural gas (LNG) in the first half of 2022, the U.S. Energy Information Administration said on Monday.
U.S. LNG exports rose by 12% in the first half of 2022 compared with the second half of 2021, and averaged 11.2 billion cubic feet per day (Bcf/d) between January and June 2022, the EIA said, citing data from CEDIGAZ.
Thus, the United States beat Australia and Qatar, the other two major LNG exporters.
Spot LNG prices in Europe and Asia have held much higher than historical norms since the last quarter of 2021, and reached record highs earlier this year after the Russian invasion of Ukraine. Europe is importing growing volumes of American LNG as it looks to replace as much Russian pipeline supply as possible. Moreover, U.S. LNG export capacity has expanded by 1.9 Bcf/d nominal (2.1 Bcf/d peak) since November 2021, according to EIA’s estimates.
The United States is shipping record volumes of LNG to Europe to help EU allies in their efforts to fill gas storage ahead of the winter amid growing uncertainty about Russian gas supply. For the first time ever, the European Union imported in June more LNG from the United States than gas via pipeline from Russia, as Moscow slashed supply to Europe in the middle of last month.
Most U.S. LNG exports went to the EU and the UK during the first five months of 2022, accounting for 71%, or 8.2 Bcf/d, of the total American LNG exports, the EIA said today.
U.S. LNG exports are set to decline in the second half of 2022 because of the outage at Freeport LNG, the EIA said in its latest Short-Term Energy Outlook (STEO) for July. U.S. LNG exports are forecast to average 10.5 Bcf/d in the second half of 2022, which is 14% less than the forecast in the June 2022 STEO. The EIA expects LNG exports will jump in 2023, averaging 12.7 Bcf/d on an annual basis, or 17% higher than in 2022.