The US midterm election for dummies 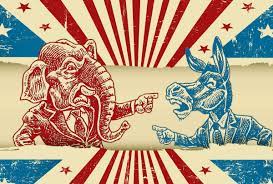 Washington, Oct 11 (AFP/APP): It is only two years since US President Joe Biden was swept to power in one of the most fraught elections Washington has witnessed, but all eyes are already on the next nationwide vote.
Biden isn’t up for re-election until 2024, but candidates vying for positions large and small — from county commissioner or tribal chief to US senator — will be sweating the outcome of Election Day on November 8.
As Democratic and Republican nominees duke it out in the final weeks of the campaign trail, here is a guide to what’s at stake.

US voters decide every two years who gets the majority in both chambers of Congress — and whether the president will get any new policies passed or if the opposition will be able to frustrate the agenda.
All 435 seats in the House of Representatives are on the ballot, as well as 35 of the 100 Senate seats.
Governors’ mansions are also up for grabs in 36 states, and there are elections for state-level lawmakers, secretaries of state and attorneys general.
Those more local contests will affect state policies on a range of issues from abortion access to voting rights and Covid-19 restrictions.

In a typical midterm, the party in the White House suffers double-digit losses in the House — 26 on average since World War II — and around four Senate seats as voters seek a check on the president’s power.
For much of 2022 the traditional indicators were pointing to business as usual, with Biden’s approval rating hovering around 40 percent, the pandemic dragging into a third year and inflation at a 40-year high.
But Democrats have been emboldened by a summer sea-change in the political outlook, buoyed by a spate of legislative achievements, unpopular Republican curbs on abortion and falling gas prices.
Neutral analysts expect a modest gain for House Republicans of 10 to 20 seats — enough to win back control of the chamber but not enough for a commanding majority.
The Senate remains a toss-up. Analysts see a continued 50-50 split as the most likely outcome, meaning Democrats would keep control with Vice President Kamala Harris’s tie-breaking vote.

Both parties acknowledge that reproductive rights have animated Democratic engagement like no other issue since the Supreme Court’s June withdrawal of the federally guaranteed right to abortion.
Some Republicans have floated plans to consider a nationwide abortion ban after 15 weeks of pregnancy should they retake Congress.
This is despite 85 percent of Americans believing abortion should be legal in all or some circumstances, according to a long-running survey by Gallup.
The issue’s salience has diminished since the summer, though, and it now trails behind inflation, crime and immigration among voters’ stated priorities.
Economic issues are also a bigger factor than concerns about voting rights and democracy, according to the latest Monmouth University Poll.
Republicans are focusing on portraying Democrats as “soft on crime” in many of the tightest swing states, and are reminding voters of record immigration figures and stubbornly high inflation, despite a cooling in gas prices.
Democrats are banking on getting credit for the White House finally clinching legislation boosting domestic manufacturing, tackling climate change and lowering prescription drug prices.
Like Biden, former president Donald Trump is not on the ballot but he remains a headache for Republicans — both for his mushrooming legal woes and his endorsements.
The issue that has sucked much of the oxygen out of the room in the final months is the hoard of government secrets that were found at his Mar-a-Lago club in Florida in a search by the FBI.
A civil investigation of his family’s finances, a criminal probe of his attempts to overturn his election defeat and the barrage of misconduct allegations from the 2021 US Capitol insurrection hearings could discourage moderate Republicans from turning out.
Meanwhile, Trump has inserted himself front and center in the election, making more than 200 endorsements, often of election conspiracy theorists and far-right candidates in swing states.
Senior Republicans have privately bemoaned the quality of Trump-backed Senate candidates in several tight races.