Thousands gather in Bosnia’s Srebrenica to mark the genocide 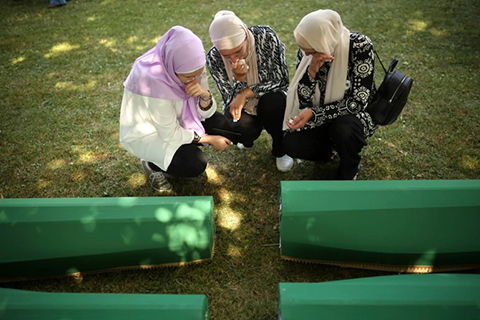 Thousands of people have converged on the eastern Bosnian town of Srebrenica to mark the 27th anniversary of Europe’s only acknowledged genocide since the Holocaust to attend the funeral of 50 recently identified victims.

As mourners from around Bosnia and Herzegovina and the world arrived in Srebrenica on Monday, families of victims reburied their loved ones and maybe find some closure after the decades-long search for their remains in mass graves scattered around the town.

Idriz Mustafic was in Srebrenica to bury the partial remains of his son, Salim, who was only 16 when he was murdered in the July 1995 massacre, along with thousands of other men and boys from the Bosniak ethnic group, which is primarily Muslim.

“My older son, Enis, was also killed; we buried him in 2005. Now I am burying Salim,” Mustafic said.

“[Forensic experts] have not found his skull, [but] my wife got cancer and had to undergo surgery. We just couldn’t wait any longer to bury the bones that we found, to at least know where their graves are,” he added.

The Srebrenica killings were the bloody crescendo of Bosnia’s 1992-95 war, which took place after the breakup of Yugoslavia unleashed nationalistic passions and territorial ambitions that set Bosnian Serbs against the country’s two other main ethnic factions – Croats and Bosniaks.

In July 1995, at least 8,000 Bosniak males from Srebrenica were separated by Serb troops from their wives, mothers and sisters, chased through woods around the eastern town and killed by those forces.

The perpetrators ploughed their victims’ bodies into hastily made mass graves which they later dug up with bulldozers and scattered among other burial sites to hide the evidence of the crime.

During the process, the half-decomposed remains were ripped apart by bulldozers so that body parts are still being found in mass graves around Srebrenica and being put together and identified through DNA analysis.

When the remains are identified, they are returned to their relatives and reburied in the Potocari Memorial Centre and Cemetery, just outside Srebrenica, each July 11 – the anniversary of the day the killing began in 1995.

Mana Ademovic, who lost her husband and many other male relatives in the massacre, was among those attending the commemoration ceremonies in Srebrenica.

Ademovic found her husband’s partial remains and reburied him years ago but said she “must be in Srebrenica every July 11”.

“It is easier when you have a grave to visit, no matter how many bones are buried inside,” she said, sitting among the graves at the vast and still-expanding memorial cemetery, hugging her husband’s white marble headstone.

But “it is impossible to describe how one feels imagining how [massacre victims] suffered” before their death, she added.

So far, the remains of more than 6,600 people have been found and buried at the cemetery.

In the two previous years, due to the COVID-19 pandemic, only a relatively small number of survivors were allowed to attend the annual commemoration service and collective funeral of the victims in Srebrenica.

But with restrictions lifted, tens of thousands are expected to attend this year, including numerous international diplomats and dignitaries.

Wartime leaders
The Srebrenica killings were the only episode of the Bosnian war to be legally defined as genocide.
Bosnian Serb wartime political leader Radovan Karadzic and his military commander, Ratko Mladic, were both convicted of and sentenced for genocide in Srebrenica by a special United Nations war crimes tribunal in The Hague.

In all, the tribunal and courts in the Balkans have sentenced close to 50 Bosnian Serb wartime officials to more than 700 years in prison for the Srebrenica killings.

Bosnian Serb leaders, however, continue to downplay or even deny the 1995 massacre and celebrate Karadzic and Mladic as heroes.